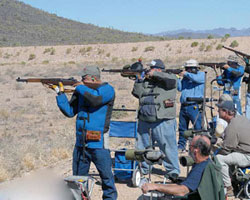 CMP was created by the U.S. Congress with an original purpose to provide civilians an opportunity to learn and practice marksmanship skills if later called on to serve in the U.S. military. Over the years the emphasis of the program shifted to focus on youth development through marksmanship.

The CMP Games begin on Saturday and continue through Tuesday, Oct. 14. A new shooters clinic will start off Saturday’s events. On Sunday, another new event is the Rimfire Sporter Match, which is designed to give recreational shooters in the Southwest a chance to try this growing shooting sport.

The Creedmoor Cup Matches begin with a high-power rifle clinic on Wednesday, Oct. 15, followed by four days of matches for service rifles and match rifles from Oct. 16-19. Members of the U.S. Army and U.S. Marine Corps Service Rifle Teams and Team Bushmaster will be on hand to assist with the clinic and subsequently compete in the matches.

The Ben Avery Shooting Facility is owned and operated by the Arizona Game and Fish Department and is located on the northwest corner of I-17 and Carefree Highway in north Phoenix. For more information about the facility, visit www.azgfd.gov/basf.

The Arizona Game and Fish Department prohibits discrimination on the basis of race, color, sex, national origin, age, or disability in its programs and activities. If anyone believes that they have been discriminated against in any of the AGFD’s programs or activities, including employment practices, they may file a complaint with the Deputy Director, 5000 W. Carefree Highway, Phoenix, AZ 85086-5000, (602) 942-3000, or with the Fish and Wildlife Service, 4040 N. Fairfax Dr. Ste. 130, Arlington, VA 22203. Persons with a disability may request a reasonable accommodation or this document in an alternative format by contacting the Deputy Director as listed above.