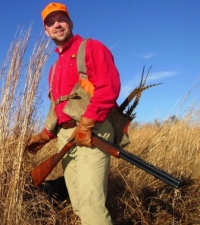 Saint Paul, Minnesota – Pheasants Forever was pleased by three recent major announcements related to the Conservation Reserve Program (CRP) announced by the United States Department of Agriculture (USDA). First, the USDA launched new incentive payments for landowners who open up their CRP to public access. Second, the USDA announced it has updated CRP soil rental rates. Both announcements came in a week when the USDA also released a study highlighting the immense benefits of CRP.

USDA Launches Public Access Incentive for CRP:
At the White House Conference on Wildlife Policy in Reno, Nevada, Vice President Dick Cheney announced a new incentive payment through the CRP to landowners who allow public hunting access on their property. Landowners who are enrolled in CRP will now be eligible for a $3 per acre incentive if they sign on to their state’s hunting access program; the incentive is expected to open an additional 7 million acres of quality wildlife habitat for hunting. USDA’s Farm Service Agency (FSA) will announce signup for the public assess incentive in the near future.

“Without access to places to hunt, there will be an erosion of people who go hunting – this is one of the most fundamental issues we face today,” commented David Nomsen, Vice President for Government Affairs with Pheasants Forever/Quail Forever. “Enhancing a program like CRP that has been so successful at protecting critical wildlife habitat by encouraging landowners to open that land for hunting is a major victory for sportsmen and women.”

Updates to Soil Rental Rates for CRP
Since the new Farm Bill was signed in May, Pheasants Forever’s top priority has been to push for updates to CRP soil rental rates. This year marks the third year in a row that FSA has updated soil rental rates nationwide in an effort to stay current with the market. These new rates will be used for any new CRP contracts approved going forward, and will make practices like CRP’s continuous State Acres for Wildlife (SAFE) practice more attractive to landowners as they consider their options. Updated rental rates are now available for new CRP contracts. The increased average CRP rental rates have made them much more competitive with local cash rent.

“CRP has worked for more than two decades, because it has made good financial sense for our farmer friends,” explained Nomsen. “These updated soil rental rates will help CRP continue to be a viable option for landowners, and consequently is a critical move by the USDA in support of CRP’s wildlife legacy.”

Immense Benefits of CRP:
A recently completed study concludes that two USDA conservation programs provide benefits on more than 5 million acres of wetland and adjacent grassland habitat in the Prairie Pothole Region. The study quantified how the establishment and management of prairie wetlands and associated grasslands through the CRP and the Wetlands Reserve Program (WRP) have positively influenced ecosystem services in a number of ways. For details on the study, click here.

“This has been the biggest year of ups and downs I’ve ever experienced in the conservation world. We have fought diligently to prevent CRP from heading the way of the Soil Bank, and while we are certainly still in murky waters, last week provided a good deal of hope for the future,” Nomsen said.

Pheasants Forever and Quail Forever are non-profit conservation organizations dedicated to the protection and enhancement of pheasant, quail, and other wildlife populations in North America through habitat improvement, land management, public awareness, and education. PF/QF has more than 129,000 members in 700 local chapters across the continent.