AimPoint – -(ShootingWire.com)- Ever since their introduction in 2007, market response to Aimpoint’s Micro series sights has been outstanding, with wide acceptance by hunters, competitive and sport shooters, law enforcement, and military end users. As part of Aimpoint’s continuous improvement doctrine, we consulted with Aimpoint Dealers, shooting industry writers, and consumer focus groups regarding the features of the Micro series, and determined that the bright blue finish on the Micro H-1 sight needed to be changed to a non-reflective bead-blast finish. 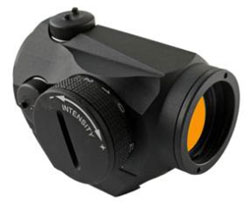 Effective immediately, all Micro H-1 sights shipped from Aimpoint will have this new enhanced finish. The new product is currently in stock at our Chantilly, VA warehouse for immediate delivery, and Dealer orders will be filled on a first order in – first order out basis.

The new matte finish is expected to further increase consumer interest in the Micro H-1. The Micro H-1 is already experiencing high demand from customers who see the performance benefit a high quality red-dot sight has on improving their shooting success, as well as the economic benefit from needing to purchase just one electronic sight that can be utilized across multiple hunting seasons and shooting sports. The Micro H-1 can be mounted on everything you carry in the field: rifles, shotguns, handguns, bows, black powder rifles, rimfire handguns/rifles, and dangerous game rifles – just by swapping mounts. The Micro H-1’s new matte finish will also appeal to civilian owners of AR-15 style rifles desiring a compact red-dot sight, but not needing the night-vision compatibility and increased water-proof features of the Micro T-1. The original Micro H-1 was selected for Field & Stream Magazine’s “Best of the Best” optic for 2007, and was also used by Brian Zins to capture his unprecedented 9th National Handgun Championship at Camp Perry this year! Aimpoint is preparing to release exciting new mounts for the Micro H-1 at the upcoming SHOT Show, which will allow the Micro H-1 to be utilized on some very popular firearms – don’t miss it!

The natural aluminum finish of the Micro R-1 makes this sight a natural for any stainless steel handgun or rifle. Aimpoint is about to introduce a series of new mounts for the Micro R-1 as well. Come by the Aimpoint Hunting booth #661 at the SHOT Show in Orlando and find out why the Micro R-1 is going to be one of the biggest sellers for Aimpoint Dealers in 2009!

The tactical member of the Aimpoint Micro series, the Micro T-1 has developed a strong following within the law enforcement and military communities. The Micro T-1 was an immediate hit for use on flat-top AR-15 rifles and M4 Carbines. US Law Enforcement agencies also began purchasing this sight for use on shotguns, and sub-machineguns. The Micro T-1 on a tall riser has become a recent icon mounted on M4 Carbines in the hands of skilled operators worldwide. Recent aftermarket mount developments have also resulted in the lightweight Micro T-1 being utilized on M249 and M240 machineguns, and on top of larger magnified optics including sniper scopes and Rifle Combat Optics.

The Micro T1 has proven itself under combat conditions to be the first compact red-dot sight tough enough to wear the Aimpoint brand. The T-1 sight is waterproof to 25 meters (80 feet), and Aimpoint’s ACET diode technology allows for over five years of continuous operation on a single CR- 2032 battery. Stop by Aimpoint’s Law Enforcement & Military booth # 9369 at the SHOT Show to see for yourself, and take a look at an exciting new tactical handgun mount for the Micro T-1 as well!