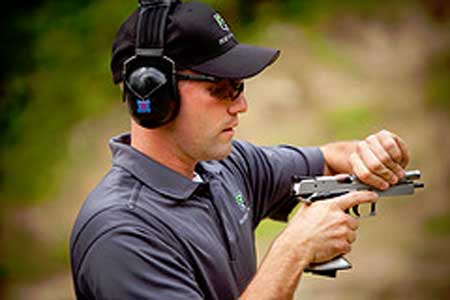 “Alan [the Match Director] and his staff at the Area 8 Championship did a great job of challenging the competitors and making it fun as well,” commented Michel. “I can honestly say this was the best competition I have faced all season and I had a blast with the folks in my squad. I look forward to going for my “8 for 8” in the same year at the next Area Championship in November.”

Michel’s next competition is the 2010 US IPSC National Championship (World Shoot Qualifier) at the Mid-Carolina Rifle Club near Columbia, SC on October 1st – 2nd, 2010.

ABOUT MAX MICHEL
In 2010, world champion shooter Max Michel joined forces with Revision Eyewear in a partnership founded on mutual performance excellence. At age 28 Max Michel is a legend within the world of competitive shooting. A three-time IPSC World Speed Shooting Champion, five-time USPSA National Champion, and two-time US National Steel Champion, Max is a dominant force in the pistol shooting sports. Born and raised in New Orleans, Max joined the famed U.S. Army Marksmanship Unit (USAMU) Action Pistol Team in 1999 where he served for 10 years as an Army shooter and trainer. Today, Max is recognized worldwide as a top tier athlete in the practical shooting sports and Revision is proud to be Max’s eyepro brand of choice – both on the range and off.

ABOUT REVISION
Revision develops and delivers purpose-built eye, face and head protection solutions for military and tactical clients worldwide. We are specialists in integration for the optimum and necessary balance of protection and performance. To that end we bring the most advanced expertise, state-of-the-art facilities and finest technical minds. Clients include the U.S. Department of Defense, the Canadian Department of National Defence, the Netherlands Defence Materiel Organization, the Swiss Federal Department of Defence and the UK Ministry of Defence. Privately owned and ISO 9001:2008 certified, Revision’s operational headquarters is located in Essex Junction, Vermont, USA, with additional offices in the Netherlands and Canada. For more information, visit www.revisioneyewear.com, write [email protected], or call +1 252-288-5805.

Become a fan of Revision Eyewear on Facebook. For every 50 new fans, Revision proudly donates one set of eyewear to deployed troops.