Fortunately I was so mesmerized by the stunning beauty of Zimbabwe during the one-hour flight that I paid little attention to our need for a precision landing.

I opened the door of the cockpit with a second effort and paused to take in the panoramic view of the handsomely rugged surroundings. I then stowed my gear on a restored 1996 Land Rover and the two-hour drive to a camp on the banks of the Zambezi River ended a 21-hour journey that began in Colts Neck.

This was my third safari to Africa but my first visit to Zimbabwe, a landlocked country located in the southern portion of the continent. The country is home to prolific herds of cape buffalo, or as the indigenous shona people call the animal nyati, which was my quarry. Cape buffalo is one of the dangerous
big five game animals found on the continent, a distinction shared with the elephant, lion, rhinoceros, and leopard. Ill confess up front that I accomplished my goal after five grueling days of safari, but the lesson I
learned from the people of Zimbabwe holds legitimate claim to this story.

In this region of the country the shona people survive primarily by agricultural means, their crops being maize and cotton. The land lacks the rich soil needed for farming but what is produced is a labor of both men and women.  They also raise chickens and goats but this practice was limited to their own needs and not commercial enterprise. These poorly nourished animals roamed freely about the unfenced properties of the villages. 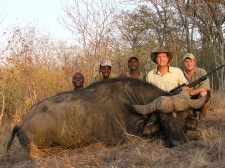 families. Most decisions are made within the family, although organized political states are seen as a centralized power source. Shona are headed by a chief whose status was conferred by inheritance  and power given in the manner of a king. The chief in the area lived in a centralized location and was accompanied by his court, a group that would offer advice about the most important decisions.

For most any American the first impression upon entering a shona village would be their degree of poverty. It is a generous description to refer to them as poor, especially by western standards. However upon further exposure to these people I was reminded of the centuries old wisdom of philosopher A.P. Gouthey, “Make no mistake, my friend, it takes more than money to make men rich”. Using  Goutheys reasoning I came to learn that the shona are some of the worlds wealthiest people.

My first exposure to this was during the first night at camp. On the shoreline of the Zambezi River my friend Rick and I sat around an open fire of mopane wood and from across the river voices carried our way. These voices were filled with song and there were regular eruptions of laughter. I would learn soon enough that this celebration was not for any particular event but was a joyful display of community spirit by the natives of the fishing village as they prepared to make their living seining the swift currents of the mighty Zambezi.

It struck me that in my fifty years of living in America I had not once heard such exuberance filling the streets where I lived, let alone imagine it as preparation for going to work. But for the shona it was rooted in their culture.

I also witnessed their joy shortly after my partner harvested his cape buffalo. A requirement of the safari area we hunted is that the game be shared with the locals. We drove 2 miles to the nearest village to spread the word about the availability of meat. A human telegraph quickly developed as runners spread the word from hut to hut. We drove seven men and three women (one woman carried her 1 year old child on her back) as close as we physically could to the 1700-pound carcass, though there remained a half-mile hike through the bush. They used burlap bags as a means for carrying the meat. Although they knew they would have to lug their
food 2 miles to their huts I didnt need a translator to tell me they were grateful for the task. Their light-hearted laughter and warm demeanor were all the evidence that was needed. Im also certain that they made multiple trips.

I was struck by their acceptance of such hardship and recalled that only a few days earlier I was in a shopping mall back home and heard a young girl arguing with her mother, then saw her burst into a fit of anger and tears as her mother threatened to confiscate her cell phone. She proceeded to scold her mother for even thinking of a punishment with such enormous consequences to her social status. It was in head shaking disbelief that I contrasted this to what I was witnessing in Zimbabwe.

When we began pursuit of my cape buffalo it was 3:00pm but it wasnt until days end when the stalk was completed and by then we had traveled deep into the bush. By time the remains were butchered for transport back to the truck it was under cover of darkness.

Each of four skinners carried an 80-pound quarter section of the animal on their head. An additional two trackers carried the dense skull and cape, a weight of almost 250 pounds, tied to a pole that stretched between them and the weight of which pressed heavily on the bony prominences of their shoulders. The
most impressive aspect of our return was the conditions under which the shona operated. They struggled with their burden the entire six hours with a lone flashlight that wasnt nearly sufficient to provide sure footing on a terrain filled with slippery inclines, steep drops, loose rocks, towering elephant grass, and skin-tearing thorn bushes.

During our meandering six-hour trudge I never noticed a single outburst of despair, frustration, anger, or defeat – in spite of their exhaustion. During our brief rests I did note that the tone of their voices maintained a gentle quality. I saw their frequent bantering and laughter as proof of their indomitable spirit. I couldnt help but to contrast their acceptance of the overwhelming task with how a parent would be greeted back home with a request for their kid to take out the garbage or to clean their room. I admit to being ashamed at having compared the scenarios. Throughout my stay I saw the shonas appreciation for many things we Americans take for granted. There was the warm smile of a young villager when she saw a picture of herself for the first time on my digital camera, the dignity in the way shona accepted my familys second-hand tee shirts, polartecs, and baseball
caps I brought with me – items that nearly petrified from lack of use atop shelves or in the corners of our closets.

I also witnessed the body language and gestures that conveyed the warm and caring nature of the shona. But one particularly poignant occurrence took place on the day I left. I was given two unsolicited letters from my tracker Edmore, one for my son and one for my daughter. In broken English he described his
disappointment that trophy quality of my buffalo wasnt to his satisfaction and gave a promise of a more impressive trophy should I return someday. He closed by signing his name and referencing a rural p.o. box in the hope that my children would reply. I learned on the drive to the airstrip that the shona enjoy
receiving mail since they rarely, if ever, have need for any. A condition I thought would be welcoming in view of the high volume of spam and unimportant emails I receive on my computer, and the large number of unwanted retail catalogs and bills I retrieve from the mailbox.

I am not implying that I would prefer the way of life of the shona, or that any American would for that matter, but I do admit that there is a price we pay for maintaining our high standard of living and having fingertip access to state-of-the-art technology. There is a trade-off for our all-consuming pace of living and our need for respite in our homes at the days end. I think we are vulnerable to overlooking the simple joys available to us in our lives. From this perspective maybe the shona can teach some of us a lesson about taking our blessings for granted. Make no mistake, my friend, it takes more than money to  make men rich.

I wonder if A.P. Gouthey ever traveled to Zimbabwe? Ant is a public speaker on the topic of conservation and the ways  anglers and hunters can become involved in shaping outdoors releated legislative policy. He has authored three books on conservation, hunting and the great outdoors including the controversial and highly regarded, “Color The Green Movement Blue” (available as ebook). His other books include; “Take Me on Safari: A Family Affair” and  “The New Age Hunter”. He also wrote the children’s book “Where is Wildbeary?”

Ant is available to speak at your club and will do book signings.  ~ Contact him: [email protected]

1 Comment
Inline Feedbacks
View all comments
Recent Comments
Editor’s Pick
AmmolandTV
View All
wpDiscuz
We use cookies on our website to give you the most relevant experience by remembering your preferences and repeat visits. By clicking “Accept All”, you consent to the use of ALL the cookies. However, you may visit "Cookie Settings" to provide a controlled consent.
Cookie SettingsAccept All
Read More
Manage consent