United States –-(Ammoland.com)- Its always interesting to take a look back at the firearms industry and see which guns and gear have carved out the path things have taken over the years.

Once people did start mounting weapons with lights and lasers it was almost comical. Duct taping a Maglite to your rifle was pretty much the best option you had available.

Fast forward to today’s time and you are hard pressed to find a firearm that can’t be equipped with a laser or light option, and Crimson Trace is one of the primary reasons why that is the case. It pretty much goes without saying that Crimson Trace has had a huge impact on the gun industry over their relatively short 17 years of existence. 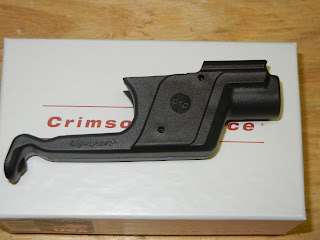 They have changed the way we view personal defense and tactical firearms as well as the training and tactics that goes along with it. They have changed the way manufacturers design their guns and how they are marketed to the public, and law enforcement… and now they have just launched a product to the marketplace that I believe will once again be a game changer. I think that very shortly down the road we are going to see that the Crimson Trace Lightguard is going to do for handgun mounted lights what their innovative approach to lasers has done for handgun mounted lasers.

Stealing the same means of intuitive activation from their extremely successful Laserguard line of products, their new Lightguard allows you to cast a 100 Lumen light at your target just by gripping the gun. Its that simple. The greatness of the design is really all about its simplicity of operation. There are no switches to toggle, no dials to turn, no modes of operation to cycle through, nothing complicated at all. Just grip the gun firmly and the light is on. The 100 Lumens of light that it provides is more than enough to light up any area that would be considered realistic handgun distance. It is also concentrated and bright enough to temporarily inhibit a bad guy’s vision at close range. 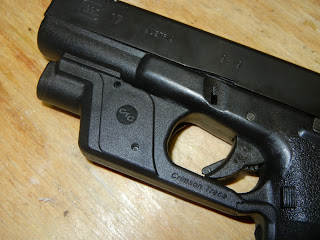 The other amazing aspect of this new design is its size. Comparatively speaking… its tiny. Weighing in at an inconsequential 1.4 oz on my postal scale, this thing doesn’t even feel like it is even there. Overall length of the entire unit is approximately 4 1/2 inches, it is 1 1/2 inches in height and just a hair over one inch in width. It doesn’t get any more perfect than that, does it? And when you throw in the fact that it contains a flashlight that puts out 100 Lumens of light, it really begins to boggle the mind.

Its because of its diminutive size that I think the Crimson Trace Lightguard is a real game changer. Now civilians have an amazing option for a concealed carry handgun light that can actually be concealed easily. Couple this light with a Crimson Trace Lasergrip and you have one heck of a setup. I am also of the opinion that the Lightguard works out to be the perfect weapon light for a nightstand gun, and it is also something that is going to greatly appeal to the law enforcement community as well. I don’t think it will ever completely negate the need for a primary handheld light in every situation, but there are many specific applications where it could work very well as a “one and only” light.

Installation of the Lightguard is simple and straight forward. Snap the two polymer sections together around the trigger guard and then tighten the hex bolts with the supplied wrench and you are good to go. You will also notice from the pictures, that it works just fine on first gen guns like mine that do not have a light rail. Changing the one CR2 lithium battery is as quick and easy as unscrewing the hex bolts and disconnecting the two sections of the unit. 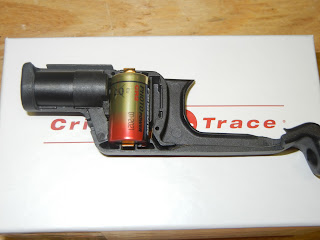 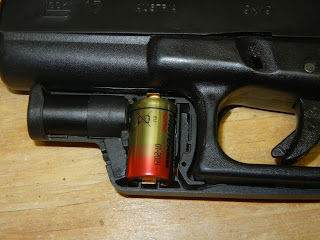 Performance at the range was everything that you would expect it to be with a product from Crimson Trace. I have no problems to report from the two separate shake downs which I have put it through. There is also no noticeable difference in the way the unit makes the gun feel and handle during live fire. Aside from the activation button on the grip, the light doesn’t even feel like it is there. Overall, it just makes for a spectacular addition for low-light shooting. Its also amazingly casts enough residual light around the gun itself that you can easily get a full sight picture even in complete darkness – impressive! 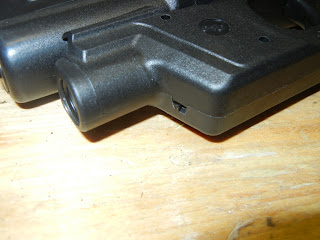 Yes, things have come a long way over the years with regards to weapon mounted lights and lasers…. and Crimson Trace just upped the ante again with the release of their new Lightguard. Once again they have proven why they are the premier name in weapon mounted lights and lasers, and they have again shown themselves to be true innovators that are dictating where the gun industry will be going in the years to come. So if you are looking for a powerful light to put on your pistol, then go on over to the Crimson Trace website and check out this new product. Its a design that is wonderfully thought out and very well executed to the exacting standards that only Crimson Trace can attain.

*You can view several more detailed pics of the Crimson Trace Lightguard here.

About:
Eric at the Gunmart Blog – Eric is a gun blogger, firearms enthusiast, and sorry excuse for a hunter. He is also an AmmoLand Shoting Sports News Columnist. Leave him some comments on this article before you go. You can also follow Eric on Facebook, Twitter and at his blog, Gunmart. Visit: GunmartBlog.com