While I was there, both as a member and as a gun rights blogger, it had been brought to my attention by fellow convention attendees that some people in the blogosphere were decrying the organization’s lack of diversity, as evidenced by a lack of women and minorities at the St. Louis conference.

The NRA Has An Image Problem: Only Older White Males Need Apply

A quick query via Google quickly turned up a couple of articles where the NRA was panned for being an organization that either apparently caters only to or only draws interest from middle-aged white men:

A post by Nicholas Phillips of the Riverfront Times observed, “There are indeed dozens of African Americans at the conference, all but a few working as cooks, custodians and security.”

Another post by The Economist wrote, “White males, the gun-loving sector of American society, also make up an increasingly smaller percentage of the population. What the industry actually needs is more Latino, black and female gun enthusiasts. But the NRA isn’t delivering these. The people who turn up to NRA conventions, like the one held this week in St Louis, remain older white men.”

It doesn’t surprise me at all, that the anti-gunners would use any excuse, such as a lack of diversity, to make the NRA look bad.

However, I will readily admit that the NRA has not made any significant progress or inroads towards increasing the number of black people in the organization and at its annual conventions. My attendance at the conference last week in St. Louis was my second NRA national convention. By my own personal accounting, I met twelve (12) black persons in attendance at the conference in St. Louis. I may have missed a few but not many.

Previously, I had attended the 2010 meeting in Charlotte. Sadly, I must report that both aforementioned events lacked significant participation by black people.

The $64,000 question is why aren’t there more black people joining the NRA and attending its annual conferences?

Some Black Firearm Owners Do Not Feel Welcome As Prospective Members
One frequently cited reason, given to me by a number of black firearm owners, is the perception that blacks feel that they would not be welcome. Personally, I had some reservations about attending my first conference. However, I went anyway. I was pleasantly surprised to discover that not only did I have an awesome trip but I made many friends that I reconnected with on my trip last weekend. The great time I experienced in Charlotte in 2010 was exceeded by my experiences in St. Louis.

I do concede that it is possible that there may have been some people at the conference who were not glad to see me there. However, if that was true, I was pleased that they kept their narrow-minded opinions and anti-social behaviors to themselves. Racists are everywhere – both in the white community and in the black community. I wasn’t going to let the mere possibility of a negative experience keep me from the event.

Many black people can recount several instances in which they felt or experienced a trespass with racist roots. As such, many aren’t keen or apt to voluntarily place themselves in an environment in which they think that an attack would be inevitable. So, despite the fact that many black people who love guns and enjoy the right to own them live in the cities where the NRA holds its Annual Meetings, they don’t attend because of fear.

Some Black Firearm Owners Do Not Know Much About The Organization
Another given reason why black folks don’t join the NRA or attend its conferences is that they do not know much about the organization and its history of empowering citizens with firearm ownership. Personally, I did not know much about the NRA until I sought out one of its credentialed Firearms Instructors for the prerequisite training for a state of Michigan Concealed Pistol License (CPL).

Even so, I thought that it was pretty cool to meet a black man associated with the NRA. To say the least, it did spur an interest within me to learn more about the organization.

Through my own personal research, I discovered that the NRA was very much involved in the drafting of Michigan Public Act 384 of 2000. That law took effect on July 1rst of 2001 and significantly altered the way that the state of Michigan issued CPLs. Michigan became what is now known as a “shall issue” state. As such, any person regardless of where he lived in the state would be issued a CPL if he met the state’s new uniform criteria that then and now applies to all residents.

Previously, the state of Michigan had a “discretionary issuing” scheme whereby each of the state’s 83 counties made up their own rules regarding who could get a CPL. Predictably, in counties where blacks were not present in appreciable numbers almost everybody who wanted a CPL received one. Alternatively, black citizens in counties – like Wayne – could only get them if they were politically connected or met some arbitrary and capricious standard created by its Gun Board to deny and discourage most people from even attempting to get one.

The Michigan Firearms Act of 1927 was the law that created discretionary CPL issuance, created the 83 County Gun Boards which issued the CPLs, and created a requirement for all handguns to safety inspected.

This law was enacted as a direct result of the Ossian Sweet case of 1925 at the behest of the political power wielded by the KKK.

In that case, Dr. Sweet – a black physician – was acquitted of murder after defending his home against a mob of racists protesting his move into their neighborhood. Thus, the aforementioned law was designed to disarm black people and make them vulnerable to the depredations of racists. Gun control has racist roots. Any organization that dedicates it money, time, and energy against these laws is an ally of the black community.

The NRA is the world’s premier firearms rights organization and firearms safety education institution. As such, over 750,000 citizens per year are trained by NRA Certified Firearms Instructors. Furthermore, they spend and exert a lot of effort, energy, and money towards fighting for gun rights. In fact, two very recent and significant U.S. Supreme Court decisions were on the very issue of gun rights in the black community: DC vs. Heller and McDonald vs. Chicago.

What Will It Take To Bring More Black Members Into The NRA?
The NRA will need to make it a conscious and overt goal to recruit significant numbers of black members into its organization. Once this decision is made, the necessary acts to support this decision will quickly fall into place. Obvious suggestions include but do not exclude the following: advertising in black media outlets, conduct boots-on-the-ground membership drives in major cities where blacks are concentrated, operate outreach activities in the black church, and sponsor educational exhibitions in selected markets.

A great opportunity awaits the NRA if they elect to embark upon this goal. Black gun owners are a growing segment of the gun community that no other organization is actively recruiting. I truly believe that if the NRA shows true and genuine interest in the black gun community, they will respond in droves.

If by chance, you want to join the NRA, use my NRA Recruiter’s link to get a $10 discount on a one year membership.

Rick Ector is a National Rifle Association credentialed Firearms Trainer, who provides Michigan CCW Class training in Detroit for students at his firearms school – Rick’s Firearm Academy of Detroit. Ector is a recognized expert in firearm safety and has been featured extensively in the national and local media: Associated Press, NRAnews, Gun Digest, The Politics Daily, Fox News Detroit, The Detroit News, WJLB, WGPR and the UrbanShooterPodcast. 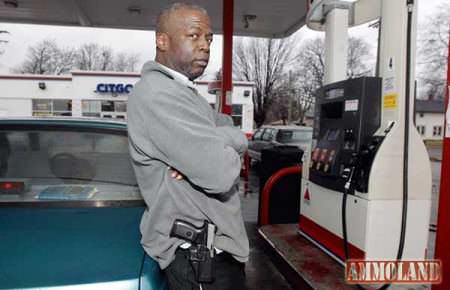 I hope Mr. Ector has the sense to realize the need for more restrictions on guns in this country. The NRA tries to appear reasoned in their thinking. Just like so many Republican politicians last year!

Let's call a crock a crock and be done with it.

If the US govt wanted to take over the country, I think your little weapons and cowboy mentality would not save your little lifestyles. Talk about stone age macho positioning.

Restrictions on guns of any kind is by definition ILLEGAL per the Constitution.
Govt cannot take over the U.S. With the millions of gun owners. ever heard of Iraq? Afganistan?
Stop drinking the koolaid

we hv to control it. let me share this posting