MISSOULA, Mont.--(Ammoland.com)- A Rocky Mountain goat taken by a hunter in 2011 in British Columbia is the largest of its species ever recorded, according to the Boone and Crockett Club.

Club officials today confirmed the goat, a male that scored 57-4/8 Boone and Crockett points, as a new World’s Record.

Since 1906, the Boone and Crockett Club’s scoring system has been used to measure the success of conservation programs across North America. The system rewards antler and horn size and symmetry—classic symbols of outstanding habitat, strong recruitment of animals into older age classes, sustainable harvest objectives and other elements of sound wildlife management and fair-chase hunting.

More than a thousand Rocky Mountain goats from Alaska to Nevada have met the minimum Boone and Crockett score of 47. But by far the most entries (541) have come from British Columbia.

“British Columbia continues to set the standard for Rocky Mountain goats,” said Eldon Buckner, chairman of Boone and Crockett Club’s Records of North American Big Game Committee. “The province remains home to more than half of the world’s population and trophy-class specimens have been trending upward each decade since the 1970s. That testifies to the professionalism of the British Columbia Ministry of Forests, Lands and Natural Resource Operations.”

The new World’s Record goat surpassed the old mark by a substantial 6/8 of an inch.

The previous record was actually a tie between two British Columbia goats, one taken in 1949 and the other in 1999, scoring 56-6/8.

Troy M. Sheldon of Alexandria, Ky., bagged the new record goat on the seventh day of a hunt in the Stikine River area. Sheldon’s friend Carey Renner and guide Heidi Gutfrucht of Northwest Ranching and Outfitting accompanied him on the hunt. He used a Tikka T3 .270 WSM to make a perfect 319-yard shot across a ravine.

Sheldon will be invited to include his trophy in a public exhibition held as part of Boone and Crockett’s 28th Awards Program in Reno, Nev., next year.

About the Boone and Crockett Club 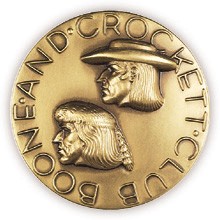