Washington, D.C. –-(Ammoland.com)- The coalition of more than 700 national state and local hunting and fishing organizations and businesses that is Vanishing Paradise praised the Senate and House for reaching an agreement on a Surface Transportation Extension Act conference report that includes the RESTORE Act.

The RESTORE Act dedicates 80 percent of the Clean Water Act fines from BP and other parties responsible for the 2010 Gulf oil disaster to restoring the Gulf Coast environment and economy.

“We applaud the transportation bill conferees in the House and Senate for making Gulf Coast restoration a priority by including the RESTORE Act in their conference report,” said a statement by Vanishing Paradise. “Passing this bipartisan, bicameral legislation is the fair and just thing to do for the ecosystem and communities of the Gulf. We look forward to seeing the RESTORE Act through to the final stage of congressional consideration and signed by the President into law as soon as possible.”

“The RESTORE Act is the culmination of years of work from hunters and anglers from across the nation, all working to restore the Gulf. A tremendous number of individuals, organizations and businesses have voiced strong support for restoring the Mississippi River Delta and the Sportsman’s Paradise that is coastal Louisiana,” said Land Tawney, National Wildlife Federation’s senior manager for sportsmen leadership. “This issue is extremely important to the sportsmen and women of America and lies at the heart of our conservation heritage.”

The RESTORE Act has been an important initiative in conservation legislation for hunters and anglers from across the country due to the 10 million migratory waterfowl that winter or stopover on the Mississippi River Delta and the hugely significant commercial and recreational fishery the Gulf produces. The amendment comes at a crucial time for an ecosystem that faced extreme degradation before the oil spill, which only added insult to injury. Although much of the visible oil is gone, the region remains in jeopardy as food supplies and habitats are still recovering from the impacts of oil—and may face impacts from the spill for decades.

“The spill, albeit tragic in and of itself, shed light on the greater desolation of the Mississippi River Delta through manmade erosion,” said Noel Vick of Traditions Media. “Seeing this thing to the end has been a passion, actually an obsession of mine since first covering the disaster in 2010. After that first tour of the region I absolutely fell in love with coastal Louisiana. Experiencing the marsh gave me perspective on how that trickle of water that begins at Lake Itasca in Minnesota collects and gathers to become an epic natural resource that becomes one with the ocean.

“From waterfowl nesting in the prairie pothole region to massive tuna snapping topwaters within sight of New Orleans, North America’s sporting community is inseparably connected by the Mighty Miss.”

“The outdoorsmen and women of Louisiana thank our congressional delegation, especially Senators Landrieu and Vitter and Congressman Steve Scalise, for their diligent and tireless work on the RESTORE Act,” said Chris Macaluso, coastal outreach coordinator for the Louisiana Wildlife Federation. “Louisiana now stands a few signatures away from potentially billions to begin building the projects needed to restore and protect our vanishing coast. It is now up to the hundreds of thousands of sportsmen and women in Louisiana to ensure these RESTORE Act dollars are put to work rebuilding our coast as quickly as possible.”

“The RESTORE Act will provide desperately needed funding for restoration of the Gulf Coast’s wetlands,” said Bart James, director of public policy for Ducks Unlimited. “Positioned at the terminus of the Central and Mississippi Flyways, these wetlands represent the single most important wintering area for waterfowl in North America and a top priority for DU. We applaud Congress for their hard work and vision in getting the RESTORE Act across the finish line to help restore the Gulf’s wetlands that are the backbone of the nation’s economy by supporting significant oil and gas, navigation, commercial fisheries and recreational hunting and fishing industries.”

In addition to restoring ecosystems and communities, a recent report by Mather Economics estimates that spending $1.5 billion per year in coastal wetland restoration would create 57,000 new jobs over the first 10 years. Funding for such projects will be made possible through the RESTORE Act. These jobs will not just rejuvenate an ailing economy but also provide a boost to a degraded environment – an environmental and economic win-win.

“Using money from the oil spill to restore the Gulf makes sense to anglers all across the country,” said Jim Martin, conservation director for the Berkley Conservation Institute, which is part of the tackle manufacturer Pure Fishing, Inc. “In February, the Bassmaster Classic was held in Louisiana in the same region where premier saltwater fishing attracts sportsmen and women from all around the world. It all depends on a healthy marsh that is the incubator for the fisheries of the Gulf. It is a region that matters to sportsmen and women.”

“When we at Huntducks.com first heard about the issue of the vanishing wetlands in America’s most important waterfowl wintering grounds, we stepped up right away. It is encouraging to see Congress is listening to the sportsmen and women of the country. The RESTORE Act will provide critical funding for the restoration of the Gulf Coast and the vital wetlands that our nation’s waterfowl depend on. This important first step will also help insure the $70 billion a year economy generated by sportsmen and women continues and protects the vital sustainable jobs that go along with it. We are proud of our partnership with Vanishing Paradise and we will continue to work with them to affect positive change for America’s waterfowl, our economy and our hunting heritage.” 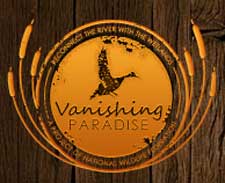