Southern California –-(Ammoland.com)-  The Bundy family has been on this land for over a hundred years.

The feds want it, and the feds don’t want to wait for the courts to decide who has the rights to it.  Why are the feds in a hurry?

Are the corrupt politicians that greedy?  Why are the feds threatening civilians at all!?  Why are any weapons, tazers or night sticks needed at the Bundy ranch?I’ve heard rumors of government snipers on scene, but I can’t confirm that.  Drop me a message if you can.

Why is deadly force justified and why is the display of deadly force not a crime?  You or I would be immediately arrested, jailed and prosecuted for these actions.

Because they can.  The government does not fear the citizens.  50 law enforcement officers were shot and killed last year.  That is a tragedy.  I’m hunting for documentation on how many times police killed innocent citizens.  Those are crimes!  Note that just because it is later called “justified” does not mean the police didn’t shoot the wrong person or had no reason to shoot anyone.

I remember that the feds murdered more children at Waco (and got away with it) than were murdered at the Sandy Hook school.  I don’t excuse their “justified” murders.  Honoring the ideals of this country and saluting the flag demands that I condemn government abuse rather than excuse it.

I know officers who live up to that obligation.  They place higher standards on themselves than are required by our laws.  Bless them.

So who will threaten civilians for the government if the officers are then identified and prosecuted?  That, sir, is a damn good question.  Maybe no one, and that is the point.  Don’t threaten civilians with firearms if you can’t get someone to assume the responsibility of their actions.

I become more libertarian the more I learn about the reality of government.

About Rob Morse:
By day, Rob Morse works in Southern California as a mild mannered engineer for a defense contractor. By night he writes about gun rights at Ammoland, at Gun Rights Magazine, www.gunrightsmagazine.com/contributors/rob-morse/ and writes the SlowFacts blog. www.slowfacts.wordpress.com . He also loves the M1911 and shoots combat handgun on the weekends.

@Jameson Parker: Isn’t Revisionist History FUN ? My first experience was a college professor that re-phrased the Second Amendment to say you had to be IN the “Militia” to have the Right to Keep and Bear Arms. I actually laughed at him. The “Militia” in the Second Amendment doesn’t refer to a Standing Army, it refers to a Citizen volunteer force like the Minutemen. Sure, they got together and trained, but you didn’t have to be IN the Militia to own a gun. The whole point was maintaining the SKILLS. And shooting a Rifle in 1789 was all about skill,… Read more »

Simon- many here agree with you dude- the spirit is growing-
what you are saying is a blanket statement- but I understand why you’re pissed brother. Peace.

Quote from above- “I remember that the feds murdered more children at Waco (and got away with it) than were murdered at the Sandy Hook school”.
I believe they did Sandy Hook also.

@Simon – What have you done lately?

Oh, you, Americans! You sit back and allow your Feds to attack and slaughter other Peoples, including your own Allies, in culture and religion, willingly woring with you and for you, such as Panama in C. America. You let it happen without a peep. What did you expect? That your Feds were going to stop there? You didn’t think that eventually, when the Feds ran out of “enemies” and just because they could, the Feds were going to turn on you? Every country in Europe from the UK to Greece is protesting their gov. screwing them, you’re the last ones.… Read more »

I do not support Bundy. He does not have indefinite “rights” to use the public land for personal gain and profit. He’s stealing the use of the land for personal gain and not paying for any of it. All you “patriots” fucked up. You do not have the moral high ground here and never did. You “think” you won this “battle” but there was no fight. You’re a bunch of disorganized idiots. They will now crack down on all you fools and you will have lost the war that you “think” you fought. You’re fucking idiots, can’t tell what is… Read more »

Thomas Jefferson sais “The strongest reason for the people to retain the right to keep and bear arms is, as a last resort, to protect themselves against tyranny in government.”

Tyranny in government was institutionalized when DHS was created and now it seem like every agency in the federal government under Emperor Barry is heavily armed and has free riegn to use deadly force as it wishes in pursuit of continued big government and control of its citizens. In the long-run, this cannot end well.

So its now known that Senator Harry Reid and his son and other cohorts were using the BLM to force people off the land to more or less to sell it to a company thats wholly owned by the communist Chinese government. They made backdoor deals and are willing to use what ever force is needed. These are acts of Treason committed against the people of his own state and the all the ranchers that had this done to them can collectively testify and file charges in their state and without question expect to get a Grand Jury Indictment on… Read more »

19th April is approaching! This does not look good at all. Be careful!!

You sleazy low life Federal Agents aren’t so damn mean and tough when the persons your terrorizing have a loaded weapon ready to draw down on you and blow your stupid brains out.

HEEL, you little dog, or DIE.

Bundy has no more right to this land than anyone else in the United States. The right wingers always think that laws apply to everyone else but themselves. He probably will end up bankrupt with his ranch and property confiscated and, if so, it serves him right. Then, when the government turns the land into low income housing he can be given an apartment there. 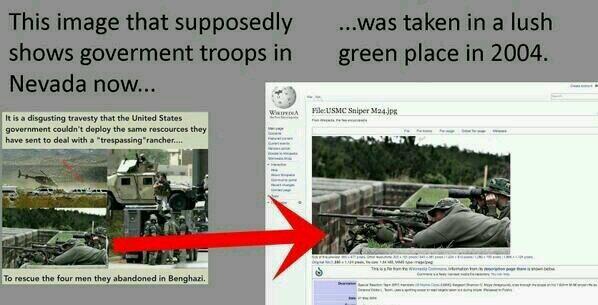 :large
Lots of lies out there.

Now we know why DHS was purchasing millions and millions rounds of hollow point ammo.

Just glad these law enforcement members kept their cool and fingers off the triggers.

No reason to use a taser on law abiding citizens.

God bless you Rob , for talking about this story. This war for our Republic / country has been going on for a long time , it will come down to states rights VS Fed overreach and not about Turtles or grazing rights. Maybe just maybe” We the people will educate themselves before its too late.. Keep up the good fight..

Let Them Eat Tortoise. The standoff in Nevada between rancher Cliven Bundy and the United States government is being represented by some portions of the mainstream press as being about a stubborn rancher’s refusal to pay grazing fees to the federal government on “federal land.” Even on conservative Fox News that was the stated cause of the current standoff, Fox News being evidently as unaware as the more liberal press that this has absolutely nothing to do with “federal land.” For one thing, there is no such thing as “federal land.” Article I, Section Eight of the United States Constitution… Read more »

Remember what he said. “We need a force just as big, just as strong” When are we going to open our eyes. He needs to go in a Big Way too!

Message to the FedGov: (quoting Tom Clancy in “Teeth of the Tiger”)

DON’T KICK A TIGER IN THE ASS UNLESS YOU HAVE A PLAN FOR DEALING WITH HIS TEETH.

Let ’em deploy their “snipers”. There are many military veterans with similar, or superior, skills. THINK ABOUT THAT FOR A WHILE, TYRANTS.

A casual observer might conclude this confrontation will result in physical juncture. Is there a ridge nearby with a name the media can use as this unfolds?

We need web cams erected there with live internet feeds so the world can watch this unfold. We need to see the actions of the BLM.