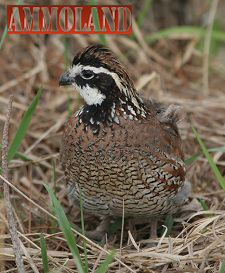 Jacksonville, Fla. ––(Ammoland.com)- Residents of Jacksonville recently formed the newest Quail Forever (QF) chapter in Florida, known as the Northeastern Florida Quail Forever chapter. The chapter volunteers plan to focus their attention on habitat throughout northeast Florida with a goal of providing future generations the opportunity to hunt quail throughout the state.

Caleb Risinger was elected as the chapter’s new president. Having grown up hearing stories about quail hunting in South Carolina and Georgia from his grandfather, Risinger became interested in quail hunting at an early age. As his passion grew, Caleb acquired two hunting companions; “Jet,” his three-year-old French Brittany, and “Sassy,” his one-year-old English pointer and English setter mix.

Risinger attended his first QF chapter meeting in central Florida when he was residing in Tampa. Upon relocating to Jacksonville, he was shocked by the absence of a QF chapter in the area. In an effort to further Florida’s outdoor traditions, Risinger and other local outdoor enthusiasts formed the Northeastern Florida Quail Forever chapter.

“We have a great mix of people who are involved with the chapter. There are older gentleman with plenty of knowledge and experience and younger guys who are motivated to tackle habitat projects,” said Risinger.

The chapter recently held their first meeting during which the chapter discussed its goals.

“The meeting was important to organizing essential membership around a common vision, growing our chapter for this year, and applying our message to our overarching goal of improving habitat for quail at Jennings State Forest,” Risinger stated. “Additionally, with the presence of the local forestry management, I believe we are forging a special relationship from the outset that will help our Quail Forever chapter make a significant difference for local quail habitat going into the future.”

The Northeastern Florida Quail Forever chapter has elected Robert Price as treasurer and Michael J. Keller as the youth and education chair. The chapter will host its next meeting April 24 at the Blackfinn Restaurant at 6:30 pm. The chapter plans to host two fundraisers this year to raise funds for their habitat mission. The chapter has tentatively decided to host its annual banquet on October 4.

Quail Forever is dedicated to the conservation of quail, pheasants and other wildlife through habitat improvements, public awareness, education and land management policies and programs.

Grew up with Quail everywhere and for years now, there have been none. In southwest Florida I have not seen a Quail in well over ten years. Being in possession of minor acreage which would facilitate Quail breeding (in order to preserve the species – not provide hunting pleasure), I am wondering if it is possible to purchase Quail for breeding purposes. I would be grateful for information concerning the above.
Thank you.
Keith & Candice Salow
[email protected]