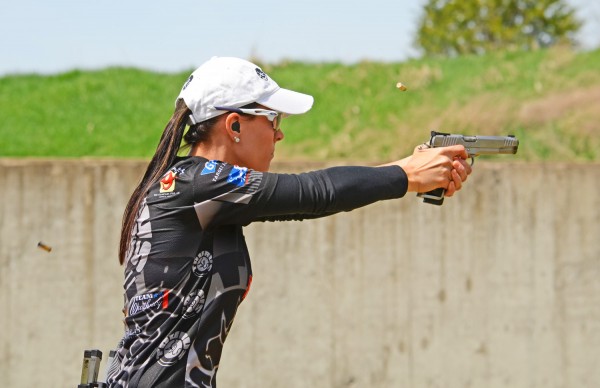 The 2014 Single Stack National Championship had over 370 national shooters participating in this year’s match. The 14 demanding stages challenged shooters of every skill level to perform their best as they engaged each scenario. Jessie was ready to defend her title, as she had been focused on a disciplined training regime that lead her to the top of the Women’s Division, to be crowned a second time as High Lady.

“The Single Stack Nationals is a match with 20 years of competitive history, and is one that I have enjoyed shooting over the past two years,” states Jessie. “This year’s match had a great designed course of fire, giving the shooters the opportunity to be strategic in their stage break down. There were many challenging stages, but still fun and entertaining, and specifically designed from the single stack round count. I’m honored to have earned this National title, especially with my Taurus 1911, and being able to showcase this firearm in a competition setting with such success!”

“We can not express how proud we are of Jessie’s win at the Single Stack Nationals,” comments Mark Kresser, President and CEO of Taurus. “Everyone in the Taurus family takes great pride in supporting Jessie as she takes to the range wearing the Taurus colors. She is a gifted competitor with a passion for the sport and a role model for many.”

Jessie will be competing in the NRA World Action Pistol Championships at the Rock Castle Shooting Center in Park City Kentucky on May 16-17, 2014 where she will be a representative of the USA Ladies squad.

Jessie Duff has taken her shooting career of a beginner, all the way to a top ranked professional, earning multiple World and National Champion shooting titles, in five different shooting disciplines. Among these are the prestigious Bianchi Cup and the World Speed Shooting Championships. Jessie has also ranked in numerous regional and state champion matches as well. Outside of shooting, Jessie is a TV personality on the hit series NRA All Access, on the Outdoor Channel. Reaching this level of shooting performance in her career, defines a well-disciplined competitor and role model for the Taurus Shooting Team.www.jessieduff.netwww.facebook.com/jduffshootwww.twitter.com/jessie_duff

Taurus International Manufacturing, Inc. is proud to be the U.S. importer of all Taurus brand firearms manufactured in Brazil and to be the manufacturer of the model PT-22, PT-25 and PT-738 pistols made here in the US. Taurus International services all Taurus brand firearms under the LIFETIME REPAIR POLICY™ as well. For additional information about Taurus, visit www.taurususa.com. High-resolution images are available at www.taurusdownloads.com.

I am gone through the article of Jessie Duff. Really Taurus 1911 is a good pistol for shooting.