Idaho – -(Ammoland.com)- I guess everything in our lives is somewhat influenced by current trends. 50 years ago if you mentioned the term pocket knife you automatically thought of a Case 3-bladed foldup knife didn’t you?

Fast forward 50 years and now everyone carries a clip-on assisted opening foldup with a 3 ½-inch blade.

So does that mean the old style foldup three bladed pocket knife is obsolete? No way. A lot of ranchers still carry a stockman pocket knife so they can cut their bull calves and hay strings.

I don’t know how many Knife Sharpening seminars I conduct every year but at everyone someone pops out a three bladed knife and wants to know how to sharpen it. So they are still popular but myself, for the last 40 years I’ve carried a large foldup.

So to cover from old school readers on up to the younger group I’m going to include popular pocket knives that span nearly a century in this list.

Here is My List of Top Pocket Knife Styles:

Stockman Pocket Knives: Out of respect to the old cowboys I have to list them first. They use the shorter stubbier blade to castrate calves. It makes sense when you think about it. If you’ve ever cut calves you’ve probably had a calf slip loose from the wrangler and kick at you. It’s best not to have a knife with a pointed blade when that happens. All you need is a sharp knife to cut the scrotum and remove the testicles. A majority of the cowboys will be using a Case Stockman Knife Model ( http://tiny.cc/pvj4jx ).

Larger Foldup Pocket Knives: I’m going to list a 3 ½-inch foldup second because that’s what I carry so of course it’s the right thing to do! I use it for all of my normal day to day task as well as skinning deer when I have a pile of 5-7 that I have to whip through fast. I like the PUMA 3 1/2? SGB Ranger Folding Knife ( http://tiny.cc/ibzvjx )  either smooth or serrated.

Clip-On Foldup Pocket Knives: These are awful popular so I have to place them near the top of the list. I know the clip makes it readily accessible but I don’t necessarily want everyone to know that I have a knife. I’m still mad that we can no longer fly with pocket knives. When I had to fly into Chicago by myself at night it brought me a bit of comfort to have one. I probably don’t have but two clip-on knives so I can’t speak with authority but I’m afraid that they could fall out too easy. Especially if I’m riding a horse up in the mountains. And if you stick it down in your pocket it is rather bulky with the clip. Check out the SOG SP23-CP Sogzilla Knife ( http://tiny.cc/edl4jx ) as the Gunny seems to really like them.

Smaller Pocket Knives: These are mostly carried by people for day to day task such as cutting string, opening letters and cardboard boxes and a great choice as your BUK (back up knife). Try the Schrade 2 3/4″ Olde Timer Knife ( http://tiny.cc/2tp4jx ) a tried and true design. 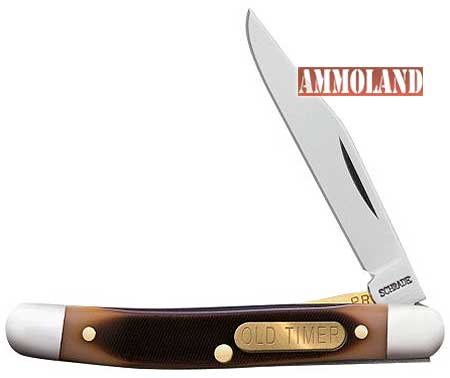 I would be lost without a pocket knife. Sometime I ought to count how many times per day that I use mine. I don’t know how someone can get by without one. You can see which one I favor but the truth be known, I could probably somewhat get by throughout the day with any of the above five for general use purposes.

So what is the best pocket knife? Like I say, I’ve carried a larger fold-up for the last 40 years and for the last 30 years it’s been a Puma. But if I had to pick one brand that is probably the most famous for their pocket knives I’d have to say Case, online at www.wrcase.com.

I was on a business trip driving through Missouri and while driving down the interstate I saw a Case outlet store. Of course I had to drop in. I cannot even begin to tell you how many options they offered in pocket knives. There had to have been hundreds and hundreds if not thousands. I don’t even know how many display cases they had full of knives.

So determining which pocket knife to buy can be a confusing and monumental tasks! So my advice? Buy them all!

About Tom Claycomb
Tom Claycomb has been an avid hunter/fisherman throughout his life as well as an outdoors writer with outdoor columns in the magazine Hunt Alaska, Bass Pro Shops, Bowhunter.net and freelances for numerous magazines.

(To properly skin you animal you will need a sharp knife. I have an e-article on Amazon Kindle titled KNIFE SHARPENING ( http://tiny.cc/5ixvjx ) for $.99 if you’re having trouble).

Disclosure: Some of the links below are affiliate links, meaning at no additional cost to you, Ammoland will earn a commission if you click through and make a purchase.
1 Comment
Inline Feedbacks
View all comments

Thank you for this great and in depth review of the pocket knife.– the pocket knife used to be my favorite.I would like to congratulate you for this great video tips. I hope in next time we will get better video tutorial what will be very much helpful for us.This advice will definitely be useful to me. I need to suggest this data what is truly useful for the home blade client. Because a good quality knife and knife sharpener is very important to have for use and long term survival.I also would like to say that you will also… Read more »