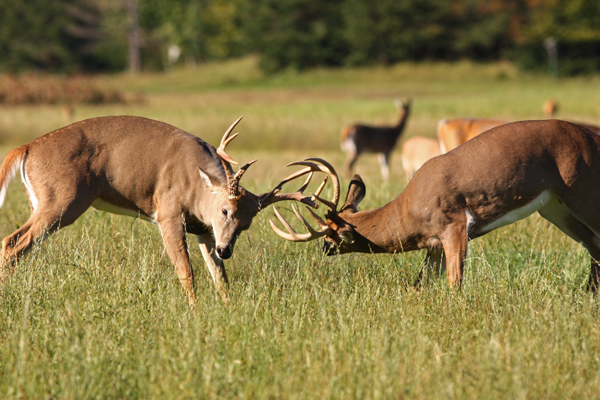 (AmmoLand.com) The crash and clank of antlers is a sound that most hunters hanker to hear – it means we are within a reasonable distance of two bucks that are sparing or fighting. However, few hunters know how to use these sounds to their advantage and “rattle-in” a buck of their own. Bringing bucks close by rattling can be a huge rush! Timing, herd dynamics and creating authentic sounds are all important if you wish to bring bucks within shooting range. Hopefully after reading this you won’t want to leave your rattling antlers at home any more.

To begin, we have the “chicken and the egg” dilemma – we need a buck to get the antlers, but we need the antlers to get a buck…that is, if you wish to use “real antlers.” Luckily the hunting industry has filled that niche and we’re able to purchase synthetic antlers, rattle-bags, and numerous other plastic systems and trinkets that are supposed to sound like “two bucks antlers coming together.”

There’s no question that to my ears, real antlers sound best, but there are some keys to getting them to work consistently. In spite of this, if you ask me what I’ve had the best success with; I would have to admit “a rattle-bag.” Why, because I have it with me all the time – they are simply easier to carry. If I’m specifically heading out to “rattle in a buck,” then I’ll bring my real antlers. They do sound best, but they can be cumbersome and noisy when you don’t want them to be. A rattle bag is, as a rule, smaller and can typically be silenced by wrapping it with a rubber-band or storing it in your pack. If something is skirting my position it’s easily accessed, and a crack on the rattle-bag can literally bring them in on a run. 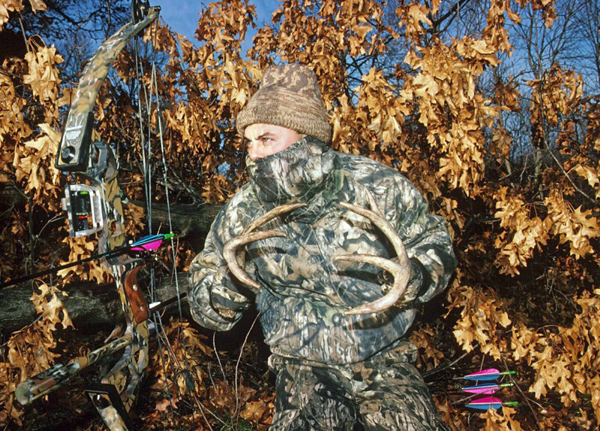 A rattle bag is almost as easy to make. Simply saw off eight to a dozen antler tines (or antler pieces of different shapes) and put them in a small cloth bag. Use a large rubber band or ponytail holders to wrap around the bag to keep them silent. A rattle bag requires less movement to use, but real antlers sound the most genuine.

Many whitetail hunters neglect to attempt rattling until just before the rut. Rattling works early in the season too; however, bucks react for a different reason than the “testosterone filled triggers” that draw their response later on. Rather than coming to the sound to protect territory or for a chance to earn the right to breed a doe, they are responding to be social with the other bucks or because they’re curious.

During early season, rather than smacking your antlers hard to imitate a knock-down, drag-out battle, you simply “tickle” them together lightly. Instead of an aggressive fight, you want to imitate “two brothers in a friendly arm wrestling match.” Bucks spar with one another to see where they will rank in the breeding hierarchy later in the season – at this point they aren’t “fighting” to compete for territory or breeding rights, they’re checking each other out for social reasons.

When rattling during early season, use soft, social buck vocalizations to add realism to the scenario, and non assertive smells like Golden Buck or Trail’s End #307 placed crosswind from your position as a confidence builder to draw them in if they decide to scent-check the area from downwind. A buck decoy with small antlers can also work well during this period and can be very exciting to use.

Traditional rattling – the type when they are responding for breeding and/or dominance reasons, requires several fine details to align before it works consistently. First, a balance to both the herd’s age structure and sex ratio will help dramatically. You want there to be a reason for bucks to come to the sounds you’re making. If there’s minimal competition amongst bucks there’s no important reason for them to check out “two other bucks fighting,” accept for possibly curiosity. When you have competition amongst the bucks, they want to be first on the scene to see if they can get in on the action. The more mature, “breeding class” bucks you have, the better rattling tends to produce.

Rattling has a chance to work all season long, but timing is important if you wish it to work well. As mentioned, it can work early in the season, but if you want it to work like you’ve seen it succeed on your favorite hunting programs, you want to time it before actual breeding and then again after – when the bucks are marking and defending territory. Here in the Midwest, the second week of October through the first few days of November, and then again around Thanksgiving for a couple weeks, with primetime being the week before Halloween. Bring the intensity down for late season rattling, almost like it is for early season rattling.

While there is a chance for rattling to work all day long, it works best when bucks are already up on the move. The hour after sun-up and the hour before sun-down tend to be the best. However, during primetime you can expect action all day long.

I’ve heard “experts” explaining “how to rattle” on DVDs, and some can be very specific on the sequence you need to perform – “Rattle for two-and-a-half minutes, grunt, snort-wheeze, rake the branch, kick the leaves and then rattle for another two minutes.” Give me a break! I’ve been lucky enough to witness countless bucks come together to spar and fight and every single one of them was different. My best advice is to picture in your mind what you believe two bucks coming together may sound like and imitate the sounds they might make.

If you’ve ever heard two mature bucks come together and fight, there are all sorts of sounds being made besides the actual crack of the antlers. You might hear leaves rustling, trees breaking, hoof-falls slapping the ground, aggressive vocalizations and countless other noises. I believe imitating these sounds adds realism to your set-up.

Almost always bucks will swing downwind to scent-check an area to gather more information with their sense of smell and try to confirm that the situation is real. There are a couple tactics we can employ to combat this – one, use the buddy system. Have both a hunter and a person rattling. Both should bring their gun or bow because you never know when they will come straight in, but by placing the hunter downwind of the caller, you are betting that the buck will indeed swing downwind to scent-check the setting and hopefully run smack-dab into the hunter.

One of my favorite techniques just before and just after breeding is to place out some Special Golden Estrus on a few Key-Wicks crosswind from my position – betting on the fact a buck will likely swing in downwind to scent-check the situation. The estrus smell works to add realism to a wide variety of possible scenarios. Obviously “doe in heat” vocalizations fit the smell perfectly, but aggressive buck sounds will also work. It could be two bucks coming together to fight over a doe just coming into estrus, so it fits a wide range of circumstances.

What makes a situation seem real to you? The more senses you pacify the more the condition seems real. So add other stimuli like scent or decoys to your rattling. Keep your ears open and listen to them spar and fight (along with other communications) for yourself – this is the best teacher. There’s no doubt that whitetails are social animals and rattling is one method we can use to draw them closer.

Would you like to learn more about improving your hunting and get discounts on the products you need? Learn from the experts by joining the new Mossy Oak GameKeepers Club at www.gamekeepersclub.com. Or call 844-256-4645.