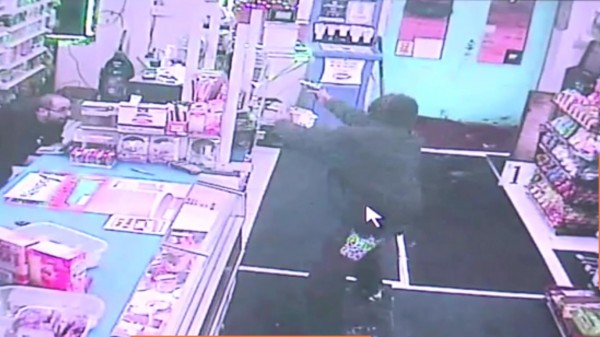 Arizona – -(Ammoland.com)-
Many people do not think much about the use of cover in self defense.  This is a mistake.   Much of the time, if and when you have to defend yourself, cover will be available and should be used.  Cover protects you from bullets and other weapons, or from access by the aggressor.   As the objective is to escape unharmed, rather than to damage or kill the aggressor, taking cover is usually a higher priority than shooting back.

In this gunfight video out of Cleveland, Ohio on 6 January, 2015, the store owner, Fares Naser, makes good use of cover.  You can see that he has his pistol in his right hand when the suspect enters the store.  The suspect draws a pistol his pocket, and Fares seeks cover behind the counter and to his left.

What is not so obvious from the video is that this position gives Fares additional protection from the suspect because of the extension of the counter and the display with the ‘No Credit Period’ sign to the right of the customer in the screenshot below.  It is not clear if the display will stop bullets, but concealment from your adversary can be nearly as good as cover. The suspect starts shooting and Fares fires back, causing the suspect to flee. There are a couple of places in the video where it looks as though Fares made a hit, but it might be a simple defensive startle reaction from the suspect. There might not be any DNA evidence from the shots because of the winter clothing that the suspect is wearing. Still using the counter and display/extension for cover, Fares shows a two handed hold.  While not definitive, the ejection port and slide shape of his pistol reminds me of the Walther PPK series.  It is likely either a .380 or a .32.

Many people like to put the thumb of the support hand over the back of the dominant hand for two handed shooting, as shown by Fares in this picture.  I recommend against this because I have seen too many thumbs with cuts and scrapes from the slide cycling back and forth.  I did not see any damage to Fares left hand, so this technique worked for him.

Numerous posters have stressed the difference between cover and concealment.  From freerepublic commenter tet68:

Always know the difference between cover and concealment.
A concrete planter is cover, a cardboard cutout of
Obama is concealment.
Parris Island taught me that.
This clerk could have shot the perp right through the
counter and vice versa.

All true but many if not most people who are untrained or inexperienced in close quarters will not attempt to shoot through concealment. Don’t know why but you can see a number of amusing videos on YouTube of people reaching over and around counter displays, glass cases, etc to try and shoot someone when they could just step back and fire right through the obstructions.

A knowledge  of what bullets will penetrate what is essential to knowing what is cover and what is concealment.