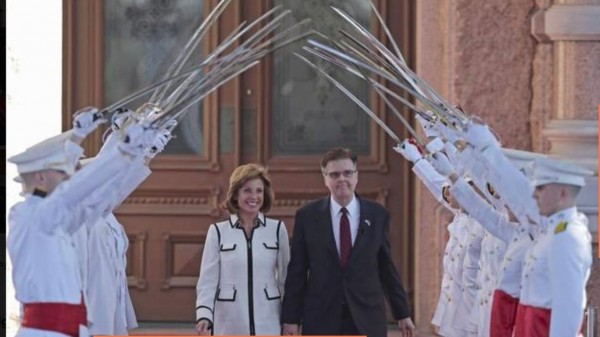 Arizona – -(Ammoland.com)- Lt. Governor Dan Patrick was quoted as saying that open carry bills might not come up for a vote this session on Tuesday.  From dallasnews.com:

“Open carry is important, but I don’t think there is support in the Legislature to pass it,” Patrick said. “The votes have not been there.”

Wednesday he reiterated his support for that legislation.  From texastribune.org:

After noting that he had referred a bill to committee allowing concealed weapons to be carried on university campuses by those with appropriate licenses, Patrick said in a statement, “Now that [Senate Bill] 11 has support and is moving towards passage we can focus on other Second Amendment issues, including open carry, which I have consistently supported.”

It does not appear to me that Patrick is actually waffling here.  What I suspect is that this controversy was ginned up by the more leftist media in Texas, attempting to derail pro-second amendment legislation.  Patrick made the initial remarks to Texas Tribune editor in Chief, Evan Smith.  Smith is an Austin Texas transplant from New York, who founded and runs the Texas Tribune, a decidedly left of center publication.  From chron.com:

When Smith pressed the Houston Republican whether he would be a “yea” or “nay” vote for open carry if he was still a senator, Patrick deflected, saying, “I don’t have a vote anymore.”
“That’s not an answer,” Smith shot back, to which Patrick finally responded, “If I was going to vote against it, then as lieutenant governor I would hold the bill. I just said I’m going to let the bill move, OK?”
Patrick, who co-sponsored legislation in 2013 to legalize concealed carry on college campuses, also said he thinks the votes are there this year to allow gun toting at universities. On Monday, a campus carry bill filed boasted a super-majority of 19 co-sponsors, the exact number needed to pass the bill out of the Senate under new rules the chamber passed last week.

If open carry is to pass in Texas, open carry advocates will have to convince 19 Texas Senators that they have more clout than leftwing Texas media does.  That is the power structure that the senators will be looking at.

Do they face the ire of thousands of dedicated activists who have vowed to primary those who vote against the bill?   Or do they face the opposition of leftwing media who have held disproportionate power in Texas for a significant time?   The defeat of Governor candidate Wendy Davis, her willingness to support open carry, and the large majorities of Republicans in the House and Senate appear on the open carry supporters side.

There is no credible public policy position against open carry, as it is in effect in 44 states without problems.   The ban of open carry of handguns in Texas (open carry of long guns is protected by the Texas constitution) is a relic of the reconstruction government.

It's typical of the media looking to build wedges among conservatives, to take words out of context. More : https://www.facebook.com/dan.patrick.texas/posts/10152543325461836 …

Then I found this statement at the facebook page above:

As is typical of the media looking to build wedges among conservatives, many stories took words out of context. I did not say the bill was dead but suggested instead that, because the votes were not there (at this time), it had not risen to a level of priority….at this point. That is far different than saying an issue is not a priority, it just means work still needs to be done.

It is clear that the activists are finding out who really opposes them.  From the facebook page comments:

Sarah Mass Lefever Figured lamestream media had something to do with this mess.. keep up the good fight. . Would love to volunteer for you!

I've been hating on you a little hard but I do know how the media can twist words. Get this done and make it happen. A lot of people are stirred up and really pissed off. All I can say is prove yourself and we'll follow. If you don't then you know how that story will end.

Pat Davis Pearson Fight for us sir, and we will fight for you. I expect to see this bill come up for vote.

I know him very well. You are right.the one who needs to be lt governor is Jerry patterson. I told people about him.

I totally agree, most people want to bitch or overlook our politicians, we put some new ones in and IF they don’t come thru, then it’s our responsibility to get them out. Hopefully we can get back to the strong nation and state we are, than letting politicians talk one thing, lie the other, then, Make the voters swallow it. We as citizens of the state of Texas sould not allow any politician to stay in office IF thier not listening to the people who put them in Office . Hoping the new leaders can be truthful and think with… Read more »

Its. One thing to be supporting open carry I support freedom but it takes action to defend freedom. It will take action to pass open carry. Politicians have a way to twist words. Those new senators we gun owners put in office better pass this bill. I gave alot of my time and money to put them in office. There will be hell to pay senators. .

I dont know about Patrick yet ! Sounds like he will be one of them that says,..”what I said doesn’t mean what I said” types,..or ‘my statement was taken out of context” !

I have been one to hard on lt patrick. I have delted with him in the past.I hade over 1500 people that sighen a position for open carry last session and he also sent me a letter that he supposed open carry I gave that letter to jerry pattern his campass carry did not pass last session bur now its the first bill to be past???