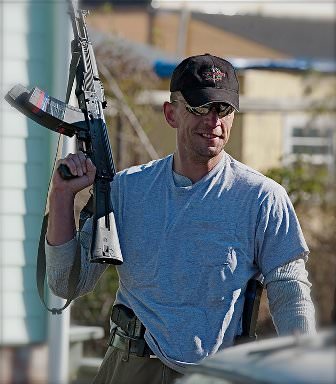 Biloxi, Mississippi (Ammoland) “Guns made no difference.” was the takeaway headline from the mainstream media after a re-enactment of the Islamic terror attack on the Charlie Hebdo offices in Paris last month. The anti-gun movement was quick to use the two-minute news story as “proof” that the concealed carry movement is delusional.

In an exclusive interview, Sonny Puzikas, a veteran trainer and one of the aggressors in those scenarios and find out what really happened. The results are not what the bias news reporters would have you believe. You can listen to the entire interview on Student of the Gun Radio.

Unlike the television format, through the magic of digital radio, we will have the opportunity to explore topics more deeply rather than just give them a quick glance.  Discussions will address both that which is current news in the firearms world as well as traditions and foundational principles.  Student of the Gun, a beginner once, a student for life.

If only some of the people who “shot” video could have “shot” hot lead instead maybe those two terrorists may have never even made it into the building. Anyone who believes that citizen owned firearms would have made no difference in the outcome are just denying the truth. Attacking a building filled with unarmed inhabitants is totally different than attacking one which may contain X number of armed people, not even taking into consideration the people on the street (and nearby rooftops, excellent tactical advantage could have been had on those rooftops I might add,) that may have been brought… Read more »

Whatever the scenario, I would rather die with a gun in my hand, than my gun in the home safe.. If guns are useless, then why do cops need them, or DHS, or IRS, or TSA? It’s not about whether I live or die, I’m safe of not, it’s about freedom and liberty, while I live.. End of discussion…

In my opinion the whole rerun scenario was run very badly. Using highly trained, highly experienced, operators as the aggressors did was the first mistake. While we can assume the two Islamic killer brothers received some training, they in all likelihood didn’t receive even near the amount of training and for sure not the EXPERIENCE the scenario aggressors have had. Second, the scenarios could not be run EXACTLY as the Charlie Hebdo murders because many of the details have not been released yet. So instead a few well meaning pro-gun folks went off without full thinking off of the ramifacations… Read more »

“set back the pro-gun movement for a couple of years at least.”

You must be a dope smoking hippy/hipster. Troll