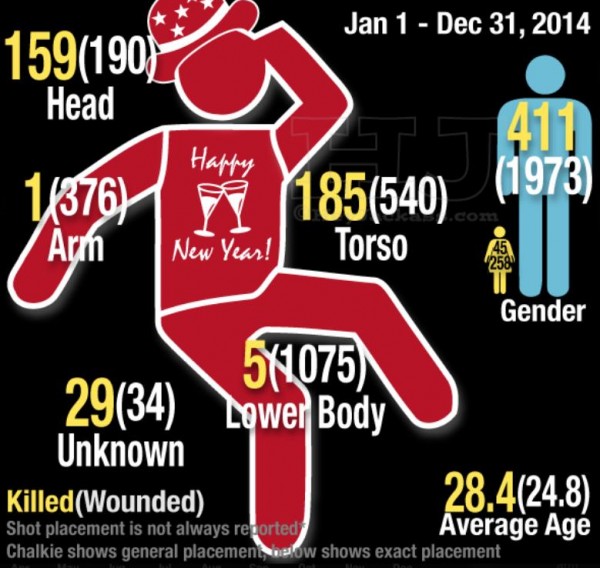 Shooting a person is a deadly serious business.  There is always a chance that the person shot will die.  The latest statistics that we have from Wisconsin is that about one out of eight people shot die.  At the Chicago site shown above, the number for 2014 is about 1 out of 7  (2619 shot/375 killed)    That is from shootings that are treated in hospitals.  At least some people choose not to be treated.  We do not know what number that may be, but prison interviews have found that a number of criminals choose not to go to a hospital, they have their wounds treated by themselves, family, or by some form of care in the underground economy.

A gunshot wound is potentially life threatening, and the law treats the person shooting as using deadly force for that reason.  Wounds to the extremities can kill, though the percentage is lower.   An Alabama intruder was shot in the leg.  He died.  From wiat.com:

The suspect collapsed after running away due to a bullet striking an artery in his leg. According to Tarrant Police, the male suspect, who has not been identified, died early Sunday afternoon. Authorities will meet Monday to determine if there will be any charges filed.

Remember, any shot is the use of deadly force.  Police are not trained to “shoot to wound” because a shot to the arm or leg can easily be deadly, it may not stop the attack, and such targets are inherently smaller and harder to hit than aiming for the center of mass.    The policy that most instructors teach is:

For those who wish to be above average, think of the body in three dimensions, as do hunters when they place their shots on game animals.  Aim for the organ or parts that you need to destroy to stop the threat.  The heart and spine are some of the more common targets.  Remember that it takes time for bullets to take effect.  Just as a deer can run a hundred yards after being shot through the heart, a human can have 10 or more seconds of active life.  A lot can happen in 10 seconds.

If your attacker has a contact weapon, such as a knife or a club, so that they have to reach you to injure you, a target to consider is the pelvic girdle, basically everything between the hips.  It is a main support structure for the body.  Most common handgun rounds, such as the .380 ACP (9×17), .38 Special, 9mm (9×19) and up, will shatter it when it is hit.  In one step, the person is usually down on the ground, and you can walk away faster than they can crawl after you.  It is less likely to be covered by armor than the chest, and may be easier to hit than the head.   The head is more likely to dodge, and has a greater range of motion on the end of the neck.

Are you justified in pulling the trigger? Yes , then who cares.

Reason Chicago has such a high number of gun shot deaths is that the local hospital nearby when most people get shot in the Southside doesn’t have a trauma center for adults. So the adult gun shot victims often have to be transported away from the local hospital to a hospital that does have a trauma center for adults in a 30 minute ambulance ride. So the victims of a gun shot in the Southside often die in the ambulance ride.

Not every hospital can treat a gun shot victim.