Lawrenceville, Ga. (Ammoland.com) – Dead Air Armament™, the strikingly silent suppressor company distributed through BPI Outdoors,  will be allowing curious firearms enthusiasts to turn up the silence themselves by testing out Dead Air suppressors at several events throughout the month of April.

The Georgia Division of Natural Resources Wildlife Resources Division is partnering withBPI Group, the parent company of Dead Air Armament, to host a workshop at the Charlie Elliott Wildlife Center 50-yard shooting range. Experts from both companies will be on hand to demonstrate

and allow attendees to demo and learn how to use Dead Air suppressors. The workshop will be held on Saturday, April 11 in Mansfield, Ga. The cost of the workshop is free. 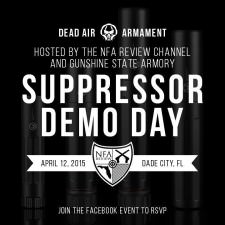 The NFA Review Channel and Gunshine State Armory are hosting their second annual open suppressor demo event with more than 20 suppressors from major manufacturers, including Dead Air Armament™. Participants will be able to try out different suppressors and test their noise reducing capabilities. The Demo Day will be held Sunday, April 12 in Dade City, Fla. The cost is $20 a person.

Dead Air Armament™ will be demoing its suppressors at the Silencer Shop Demo Event. Several brands of silencers

and firearms will be available for attendees to test out. Entry is free but attendees will need to bring their own ammo. The event will be held at Jacob’s Plain Gun Club in Greenville, Texas on April 19. Earth Day at the Range 2015 will be hosted by Quiet Riot Firearms. The event will provide attendees an opportunity to demo some of the latest suppressors on the market on their own firearms. Dead Air Armament™ will be in attendance and participants will have a chance to turn up the silence with a Dead Air suppressor. There will be an on-site trust lawyer, barbecue, giveaways and Quiet Riot Firearms specials. The event will be held Saturday, April 25 in Martin, Ga. Tickets are $20 when preordered and $25 at the door.

For more information on Dead Air Armament™ and their line of suppressors, please visit www.deadairsilencers.com or join the conversation on Facebook or YouTube.

Dead Air Armament™ is a division of Sound Moderation Technologies™, a North Carolina company designing, patenting and marketing the next generation in sound suppressor systems for civilian sportsmen, law enforcement, security and the military. Dead Air products are manufactured and sold through BPI Outdoors.