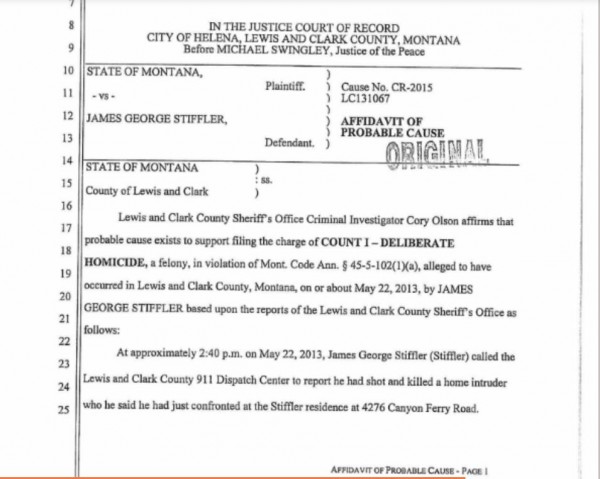 Arizona – -(Ammoland.com)- Two years ago, in May of 2013, James George Stiffler shot a man who was burglarizing his home in Lewis and Clark County, Montana. The burglar, Henry Tomas Johnson of Helena, managed to make it to his car, but died before being able to leave the property. The case illustrates the ability of forensic science to determine details of what happened. From helenair.com:

Henry Thomas Johnson, 37, of Helena, was shot dead in 2013 while apparently ransacking a home in Lewis and Clark County. Nearly two years later, the county attorney has charged homeowner James George Stiffler with felony deliberate homicide, alleging Johnson was shot in the back while trying to escape the home through a window.

Stiffler had arrived home to see a car parked outside and Johnson inside. He retrieved a Star 9 mm Ultrastar imported by Interarms. Stiffler said that he had gone inside, and fired at Johnson inside the house, toward the West.

But investigators were unable to find any blood in the house, or a bullet or bullet holes, even though the bullet had exited Johnson’s body. They did find a 9 mm bullet outside with DNA that matched Johnson. The bullet location was consistent with a shot fired by Stiffler while inside the house, at Johnson as he was exiting a window, and indicated a different direction of fire than what Stiffler had stated.

These discrepancies lead to the “Deliberate Homicide” charge, which is apparently based on the theory that Johnson was fleeing the house through a window when shot, and was no longer a threat.

A trial is scheduled. This may be another test of Montana’s Castle doctrine law. In this case it is clear that the house had been broken into; that the gun was fired inside the house; and that the burglar was inside, even if he was at the window when shot. Here is the Montana statute. From findlaw.com:

It is likely that a jury will decide if the castle doctrine fits this case.  Mr. Stiffler might have been able to avoid much unpleasantness if he had been more careful with his statements to police; or if he had waited to talk to an attorney before talking to police.

Stiffler made three mistakes:
(1) He did not block or disable the criminal’s car to prevent escape.
(2) Bigger mistake: He entered the house instead of letting the police do it.
(3) Biggest mistake of all: He lied to the police.
However, when a home intruder is “trying to escape,” he may be running to get a weapon. In that respect the murder charge looks bogus to me.

It remains to be seen if a Montana jury will find in favor of a homeowner with no previous criminal history, or if they will find that he was not justified.
c2014 by Dean Weingarten: Permission to share is granted when this notice is included. Link to Gun Watch

Property is insured and can be replaced. I dont know that I could use lethal force on someone over a little property if they weren’t posing no threat to me or my family. I would prefer to detain them for LE,or provide a description of them to LE if they ran before shooting them in the back. Shooting someone even if you would be legally justified doesn’t mean you have to.Use descretion and common sense.

I didn’t say to lie that was his mistake . In Alaska we can shoot burglars in vehicles in most circumstances.We can shoot intruders in our homes as long as we perceive them as a threat. No duty to retreat. When you have had about $50000 of unisured losses from thieves maybe you’ll understand that a thief has no rights except to die.

We need to stop the BS about the criminal left the premises or was shot in the back . So WHAT , we should not care that a thief died they got what they deserve.
We have the right to defend our property whether it’s 10 million or 10 cents it’s yours not the criminals.

No thanks Eric. You can’t just kill someone taking your stuff. Not that simple. Also never a good idea to lie to the police when they can reconstruct things pretty simply. Glad you are not making the rules.