Arizona – -(Ammoland.com)- There have been  a number of stories written claiming that functional guns are not allowed at the NRA annual meeting in  Nashville.

Charles C. W. Cooke does a good job of debunking.   But pictures do a better job.   I noticed some people openly carrying arms inside the media room at the NRA meeting.

Glocks seemed to be favored, but I also saw a 1911 and a J frame Smith & Wesson revolver.  I asked for and took these photographs of three media people openly carrying in fifteen minutes.

The other two open carriers in the fifteen minute interval carried Glocks as well.

I thought the Cold Steel push dagger was a nice touch on the belt. The carrier said that he was convinced by a Massad Ayoob article. Notice the folding knife in the back pocket.

I know that there were at least a couple of concealed carriers in the media room, because I was confided in by confidential sources. After all, concealed is concealed.

It is likely that some of the open carried guns in the media room were concealed on the floor of the convention. The media room is restricted to people in the media, so people are a little more relaxed among their peers. The NRA has been on the forefront of recognizing the new media. Two years ago, the number of new media people at the NRA meeting surpassed those of the old media.

I saw a lot of familiar faces from the Shot Show, and from the Gun Rights Policy Conference. If you are able to attend one of these events, I highly recommend them.

A while later, I noticed this 1911 type, and took some more pictures.  There were several armed people present that I did not get pictures of. This Kahr was likely carried concealed most of the time.  Nice brochure on the Fobus holsters in the back pocket.  You can just see the top of a folding pocket knife in the front pocket.  It has become axiomatic that knowledgable concealed carriers carry a pocket knife as well.  You cannot study defenses against edged weapons without becoming aware of the utility of a sharp blade. 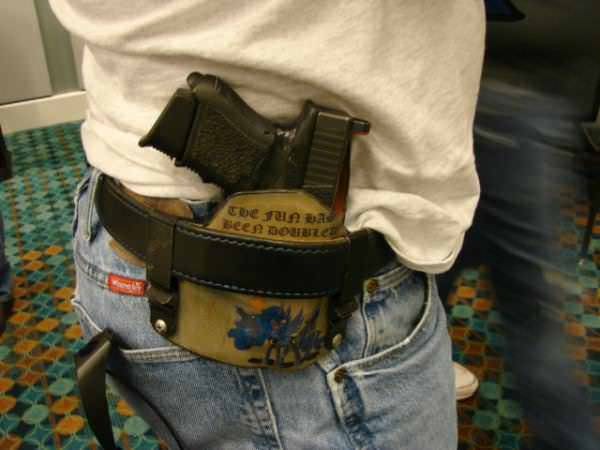 As the days went on, jackets came off and people were a bit more casual about bending over, and “printing“. I saw a number of people who were clearly carrying concealed… for the most part.  I believe the wording reads “The Fun Has Been Doubled”.

I estimate that about 20 percent of the people in the media room were armed.  That is a significant number of armed people.

Who would have thought that the media room at the NRA annual meeting would be like a cop bar?  No doubt, it added to the security.

It would be a bad idea for an attacker to think the armed guard at the door was the last security for the media room.   Still, we have seen attacks against people in cop bars.  It usually does not end well for them.

Why would you ever believe anything you read on the mainstream media sites? Carry was allowed, I OC’d and interacted with NRA staff, vendors, and LEO’s without the first issue. The NRA site clearly stated it was allowed as by law in the vendor area, but was not allowed across the street at Bridgestone Arena because of that sites policies.

Wait a minute, you mean to tell me, I cursed at the NRA because I believed the lying media. Did they actually let people carry, or was these people, the privileged LE, or even just snuck by? If carry was allowed, I do apologize to the BRA.