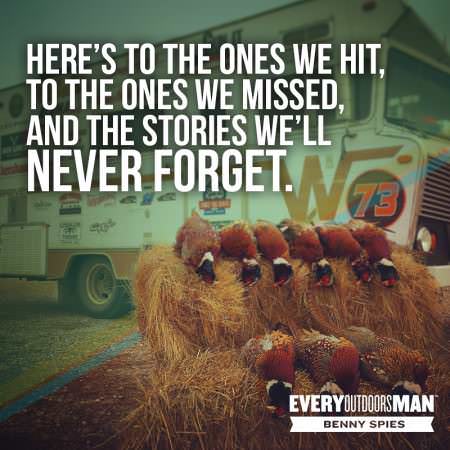 Watertown, S.Dak. (Ammoland.Com) – Benny Spies is putting a mark on the demographic he connects with in outdoor TV. For nearly six years he’s proudly represented the average outdoorsman, weekend warriors, the part-time hunters, the important majority that most outdoor shows fail to engage. Beginning today, Spies is introducing this true-to-life concept in a new branding campaign: “EveryOutdoorsMan.”

What is the EveryOutdoorsMan brand? Hunting is about real people driving beat-up vehicles into muddy farmland in Nowhere, South Dakota an hour before sunrise, all jittery on anticipation and caffeine. Hunting is about small towns and the characters met there. It’s about ducks flying overhead and profanities flying below. It’s about inside jokes and tomfoolery and shenanigans and yelling “ROOOOOOSTEEEER!” It’s about enjoying life with friends and family, creating stories about real people doing real things.

“The Everyoutdoorsman is the 9-to-5 working blue collar outdoorsman who was born and raised enjoying the outdoors,” said Spies. “It’s the guy who dreams of hunting on the weekends with his buddies while staring out the window of his office. Like me, these same guys dream of the moment, which at some point during the thousands of hours spent in the field, they might get a shot at a Boone & Crockett whitetail. And if it actually happens, hit or miss, the adventure will live forever in a story that’ll be told a million times in a thousand different ways. This is the everyman hunters’ reality.“

Benny Spies is an outdoor TV host of Gun It with Benny Spies presented by Leupold returning to air this July on Sportsman Channel. He’s a unique personality showcasing his no-frills hunting and fishing adventures across America in his ’73 Winnebago (“The Toaster”) and his 1965 Chevelle (“The Secret Weapon”). Now filming for his sixth season on national TV, Spies has come to the realization that the EveryOutdoorsMan out there needs a voice, too.

“Maybe I am on this Earth to teach you how to hunt. Because somewhere along the way, someone decided that hunting is a manufactured, carefully scripted experience involving a lot of money, a lot of gear, and a lot of time. Three things most outdoors people don’t have an abundance of, which is also my reality. I know there are a ton of everyoutdoorsman out there, so this is for them,” commented Spies.

The EveryOutdoorsMan brand and image is not the creation of a branding agency in a high-rise building, but of Spies’ reality. He’s eager to showcase how his TV show is set apart from all the others. It is all about fun adventures from hunting ducks in a cold blind, to racing RVs, to having a beverage of choice after a tough day in the field or on the water, where sometimes there might just be a miniature horse by your side.

“To me, outdoor TV is about telling an honest, authentic story. It is always about uncovering fun, amazing places with cool, remarkable people who create incredible adventures.   It’s about exploring everything the outdoors has to offer. The story is already there – you just have to find it,” said Spies.

About Benny Spies: Spies has degrees from both South Dakota State University and Florida State University and garnered TV experience working behind the scenes for Late Night with Conan O’Brien, in the Page Program for NBC, production for VH1 and as a show host for VERSUS, NBC Sports Network, and Animal Planet. At the end of the day, he’ll always maintain that he’s just a guy from South Dakota with a genuine obsession with the outdoors. Learn more at http://bennyspies.com, on Instagram at http://Instagram.com/BennySpies and on Facebook at http://facebook.com/gunitwithbennyspies

Silencers are becoming a necessity for those who like their hearing and want to keep it. The fee for acquiring a silencer is out of line with the trend for hunting rifles to have silencers on them. It’s not for staying silent so you will not be discovered but for hearing and to not disturb those who may be close by. The fee is outrageous.