Arizona – -(Ammoland.com)- On Saturday, a few dozen misguided marchers straggled across the Brooklyn bridge, demanding that more Americans be disarmed.  Notice the widely debunked “120” school shooting meme in the sign.   When you have to resort to easily disproved lies, your “movement” has no moral validity.

Consider, in a city of 12 million, in the heart of the densest support for citizen disarmament in the country, in a legal regime that has stifled the right to bear arms with numerous infringements for a century, this morally bankrupt astroturf organization is able to attract, pay, or bully only a few dozen marchers.

Second amendment supporters can outdo that in the wilds of Idaho, for free.   This is pitiful, and it shows what the Pew poll revealed.   Popular support for more restrictions on Americans right to keep and bear arms, some times wide, but never deep, has fallen to the province of paid promoters and useful idiots.   Without the support of neofascist billionaires like Michael Bloomberg, this “movement” would not exist. 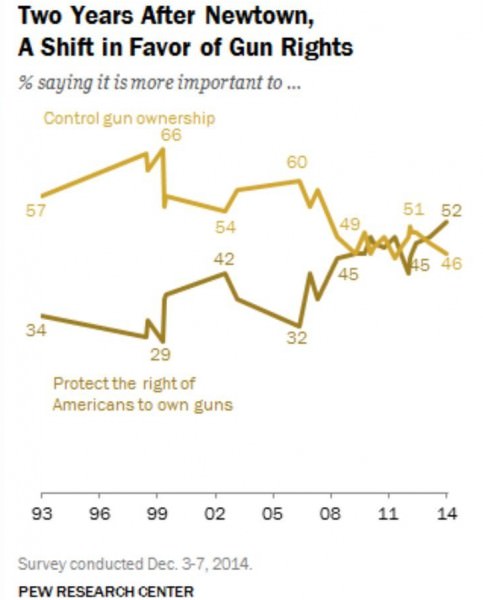 AP does their best imitation of Pravda to try to spin the story in some sort of positive way. From newsyahoo.com:

— Hundreds of men, women and children including fashion designer Donna Karan marched across the Brooklyn Bridge on Saturday demanding stricter gun laws and offering a litany of violent stories to show why such laws are needed.

If you look at the pictures, you see that they are closely cropped, with no more than a few dozen showing at any one time. A group that has to resort to emotional appeals from an eight year old victim does so because it has no rational basis:

No one mentioned that this occurred in a jurisdiction with some of the most draconian gun restrictions in the world.

In a way, this gives me some hope for the future. Michael Bloomberg may have strains of meglomania, but he is not an idiot. Some recent statements even indicate that he has learned a little reality about guns and legislation. From the aspentimes.com:

Bloomberg claimed that 95 percent of murders fall into a specific category: male, minority and between the ages of 15 and 25. Cities need to get guns out of this group’s hands and keep them alive, he said.

“These kids think they’re going to get killed anyway because all their friends are getting killed,” Bloomberg said. “They just don’t have any long-term focus or anything. It’s a joke to have a gun. It’s a joke to pull a trigger.”

While Mr. Bloomberg’s numbers are off, (they are closer to 50% than 95%) at least they show that he understands the problem is one of violent cultures. His error is assuming that access to guns somehow makes a difference, and that by attempting to disarm the whole country, he will, in some mysterious but unexplained way, significantly reduce access to guns by the violent criminal underclass.

So, he might actually be educable with real facts and figures.

Hey, it is not impossible…

If the “120 school shootings” had been a correct fact instead of a contrived lie, it still would have proven a point about how wrong their methodology is. If that many school shootings take place, what good are “gun-free zones” and doesn’t that prove they increase the risk of a school shooting? Don’t you love how liberals think extreme restrictions on Constitutional rights are justified if it would save even one life? I’d rather propose a somewhat different “waiting period” that would definitely save lives, not just maybe one. Tell liberals that they get to see what’s in the bill… Read more »

I would hate to be a kid of one of these moms who does not have enough inteligence to get their facts correct. Stupid is as stupid does…