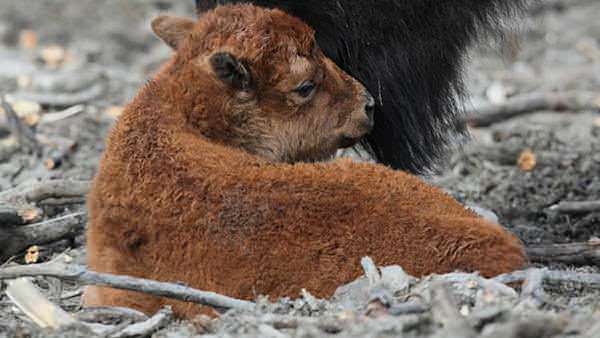 This marks the first time in 100 years that a bison calf was born in the Alaskan wild. This exciting milestone is part of a 20 year wood bison reintroduction project that sought to reestablish a wood bison population in the Innoko River region.

“It felt like having a baby shower or something. It’s just huge,” Cathie Harms, Alaska Department of Fish and Game regional program manager said. “It’s like the completion of the circle. We finally got animals into the wild and they are taking to it tremendously.”

SCI Foundation has aided the wood bison reintroduction effort for the past 10 years and is a member of the Wood Bison Restoration Advisory Group. Through its contributions, Safari Club has applied hunter dollars towards the maintenance of the bison holding facility, the care of the bison while in captivity, and the relocation of bison to the wild.

“We are excited to learn that the bison are successfully adapting to their new environment and that the herd is already growing,” SCI Foundation Director of Conservation, Matt Eckert, said. “Reestablishing the Alaskan herd is not only good for bison; it benefits other species and will eventually become a sustainable resource of Alaska’s people to manage. We just hope that the general public understands that hunters played a pivotal role in this wildlife conservation effort.”

For more information about this and other SCI Foundation Conservation Partnerships and Projects, contact Caroline Jaeger at [email protected] or call (202) 543-8733.

Safari Club International Foundation is a 501(c)(3) non-profit organization that funds and directs worldwide programs dedicated to wildlife conservation and outdoor education. Any contribution may be tax deductible under Internal Revenue Code section 170(c) as a charitable contribution to the extent permitted by law. Tax deductible amount of gift is reduced by the “Fair market Value” of any goods, services, or advantages that a sponsor receives for the donation. EIN #86-0292099

and weapons everywhere.
It is a joke?

You got it in one Ivan, they want us to know how wonderful they are to “help” in this, yet you just know they are wetting their pants in anticipation of shooting it once it’s old enough.

First calf in 100 years and now you’re shoot it to hang the head on the wall ?