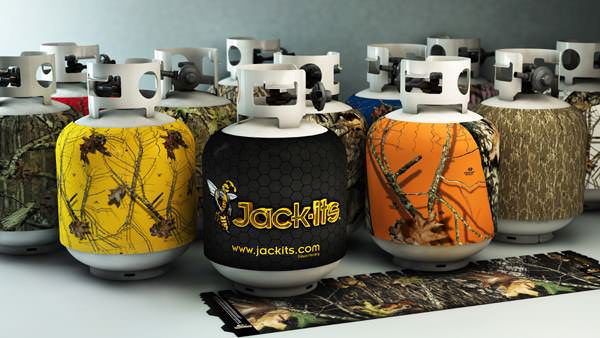 Jack-its are reusable magnetic propane tank covers, designed specifically to wrap around 20-pound propane tanks. This product gives the consumer the ability to express their own personalities via the Jack-its themselves.

“The idea of Jack-its originated while watching the Daytona 500, when I noticed all of the free advertising to propane companies that was being given away during each pass of the infield by the cameras,” Bill Ellis, COO of Ellis Graphics, said. “I thought ‘there is a market for a new idea there.’”

The team at Ellis Graphics then began the painstaking process of prototyping different die-cut patterns to make it possible for a flat sheet of magnetic material to take the rounded shape of the propane tank without kink points. After a few months, Jack-its were born.

Currently, Jack-its are being sold online at www.jackits.com and Amazon, with a suggested retail price of $19.99.  Jack-its offers covers in a variety of Mossy Oak patterns, including the new Break-Up® Country™.

“Our retail efforts will primarily focus on the outdoor and camping markets,” said Jeff Ellis, the company’s Production Manager. “There is no better partner to have, than Mossy Oak for this venture.”

One aspect that is notable about this licensing agreement is that a portion of the proceeds from every Mossy Oak branded Jack-its will be donated to the Wounded Warriors in Action Foundation.  The Wounded Warriors in Action Foundation Inc. (WWIA) serves our Nation’s combat-wounded Purple Heart recipients by providing world-class outdoor sporting activities as a means to recognize and honor their sacrifice, encourage independence and connections with communities, and promote healing and wellness through camaraderie and a shared passion for the outdoors.

“Ellis Graphics has provided printing for WWIA for many years and is grateful for the opportunity they provided, by putting us in contact with Mossy Oak,” said Bill Ellis.

If any members of the media, dealers or consumers wish to contact Bill Ellis directly, they can do so at [email protected]. The Company website can be found at www.jackits.com.

Ellis Graphics is a family-owned and operated screen and digital printing company that has been in business since 1989.  Founded by Harry Ellis, who passed in 2009, has grown from its first 750 square foot rented bay, to the 25,000 square foot state of the art production headquarters it occupies today.  Ellis Graphics provides point of purchase signage for retailers worldwide, some of the companies’ longtime customer include PODS, Outback Steakhouse, and AAA, to name a few.

On your 20# cylinders, remember there are regulations that the CGA 7 label must be visible and the Consumer Warning label. Would be a good idea to put that in the pamphlet when they buy the cover. Any questions email me.
Thanks
Ken Kirn