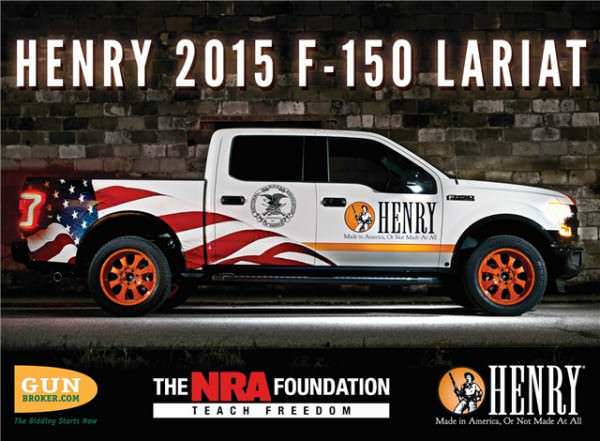 FAIRFAX, VA – The NRA Foundation is auctioning off a one-of-a-kind Henry Repeating Arms 2015 Ford F-150 Lariat 4×4 SuperCrew® custom wrapped by SkinzWraps of Dallas, Texas, on GunBroker.com.  The auction is live at http://bit.ly/HenryFordTruck and will end on August 31 at 4:00PM EST, just in time for the lucky winner to enjoy the truck during hunting season.  The winning bidder will also receive a Henry Big Boy rifle in .44 Mag customized with the serial number of their choice (maximum 12 digits, any mix of alpha/numeric, but must include at least one number).

This luxury truck features an impressive 5.0L V8 FFV engine, the most fuel-efficient of any comparable V8, along with an electronic 6-speed automatic transmission with tow mode making the Lariat driving experience practical and powerful.  The classic black leather trim interior with heated/cooled driver and passenger bucket seats creates the ideal comfort environment after a demanding day at work. The buyer of this vehicle will be as safe as they are comfortable with the upgraded technology package, which includes a lane-keeping assist and a 360-degree top-down camera display with dynamic hitch assist. A sport appearance package is also incorporated into this Lariat making it stylish without the flashiness.

The 2-speed automatic 4WD optimizes traction by transferring power to the appropriate wheels when needed so the buyer of this truck can be confident even in tough situations. Be assured that the high-quality class IV trailer hitch and smart trailer tow connector will tow just about anything, while the rear view camera makes this truck not only functional, but indispensable. Safety doesn’t stop there with an advanced security pack that includes SecuriLock® passive anti-theft system and inclination/intrusion sensors.

SkinzWraps added even more features to the already remarkable truck including a made in America TruckVault. The most recognized name for vehicle equipment storage, the TruckVault is the perfect solution for storing your new Henry Big Boy and shooting accessories. Powder coated American racing rims and upgraded Cooper tires, along with artwork featuring Henry rifles, NRA and Americana images makes this the dream truck for patriotic Americans who want to display their Second Amendment freedoms with pride.

“This generous donation is just the latest in a series of humbling contributions from Henry Repeating Arms that demonstrates their passion for the United States and The NRA Foundation,” said Kyle Weaver, Executive Director of NRA General Operations. “We are honored to have such a dedicated ally on our mission to support the future of the shooting sports.”

The proceeds of the truck will support The NRA Foundation, the country’s leading charitable organization in support of the shooting sports. Foundation grants provide essential funding to ensure the availability of quality training and educational opportunities nationwide. Grants benefit programs such as youth and women education, hunter education, range conservation, firearms and marksmanship training and safety, and much more.

“My patriotic juices started flowing the minute it dawned on me to combine the Ford Motor Company and Henry Repeating Arms into a donation that would benefit the National Rifle Association,” said Anthony Imperato, President of Henry Repeating Arms. “Henry’s contribution of two legendary American made products, the Ford F-150 and the Henry Big Boy .44 was made as part of our ongoing and unwavering commitment to support the NRA.”

Visit http://bit.ly/HenryFordTruck for photos, truck specs, and to bid on this exclusive collector’s item.

About The NRA Foundation
Established in 1990, The NRA Foundation, Inc. is a 501(c)(3) tax-exempt organization that raises tax-deductible contributions in support of a wide range of firearm-related public interest activities of the National Rifle Association of America and other organizations that defend and foster the Second Amendment rights of all law-abiding Americans. These activities are designed to promote firearm and hunting safety, to enhance marksmanship skills of those participating in the shootings sports, and to educate the general public about firearms in their historic, technological, and artistic context.  More information about The NRA Foundation can be found online at www.nrafoundation.org.

About Henry Repeating Arms
Henry Repeating Arms is one of the country’s leading rifle manufacturers. Their legendary name dates back to 1860 when Benjamin Tyler Henry invented and patented the first practical repeating rifle during the Civil War. It became known as the “gun you could load on Sunday and shoot all week long.” Henry rifles went on to play a significant role in the frontier days of the American West and soon became one of the most legendary, respected and sought after rifles in the history of firearms. President Lincoln’s Henry hangs in The Smithsonian and has become a national treasure. The company’s manufacturing facilities are in Bayonne, NJ and Rice Lake, WI.

About GunBroker.com
GunBroker.com is the world’s largest gun auction website. Launched in 1999, GunBroker.com is an informative, secure and safe way to buy and sell firearms, ammunition and hunting/shooting gear online. GunBroker.com promotes responsible ownership of guns and firearms. Aside from merchandise bearing its logo, GunBroker.com sells none of the items listed on its website. Third-party sellers list items on the site and Federal and state laws govern the sale of firearms and other restricted items. Ownership policies and regulations are followed using licensed firearms dealers as transfer agents.