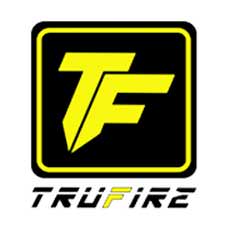 Both feature a Tru-Forward trigger, interchangeable single- or double-trigger configurations as well as Tru-Center Technology in the head.

The Chicken Wing design is Tru-Fire’s most accurate and most forgiving buckle-strap-style release to date.

The most unique and noticeable feature of the Tru-Fire Chicken Wing Bow Release is its innovative dual-finger trigger that enhances control and encourages a smooth trigger pull while reducing the tendency to “punch the trigger.”

Using both the first and middle finger to control the trigger allows it to be shot more like a hand-held release, and it also reduces the movement or rotation of the anchor point during the release, which leads to increased accuracy. The trigger is modular and can be configured as a single-finger trigger with the included attachment.

The Chicken Wing’s features Tru-Fire’s most compact head to date. It houses a spring-loaded nickel-plated steel hook with an elongated profile for ensured contact with the string loop. Once attached to the loop, the Tru-Centering head of the release has two axis of rotation to settle naturally at full draw for perfect placement in the shooter’s anchor point.

The new Chicken Wing head utilizes Tru-Forward trigger-finger positioning with a cam sear design that actuates the crisp release of the hook. With an adjustable travel range, the trigger’s release point is set at approximately 3 ounces from the factory, and when the trigger is released, the spring-loaded hook returns to the draw position. The Chicken Wing’s sound-dampening coating dramatically reduces noise.

The Chicken Wing features a leather buckle strap, and the Chicken Wing Max Bow Release Chicken Wing Max boasts a layer of padding inside the leather strap, and it is slightly wider than the Chicken Wing. Both are sewn with heavy-duty yellow stitching. The patented Tru-Fire Foldback Ring design allows the release’s head to be flipped back 180-degrees with about a pound of pressure. The head stays held in position against the buckle strap and tight to the archer’s arm to prevent the head from hitting anything while moving around the stand. The head can be flipped forward in an instant to engage the string loop.

The Chicken Wing has 10 buckle adjustment points and the Tru-Fire Chicken Wing Max has 12. On both models, there is 0.75-inches of travel length adjustment in the release head, which also can be locked down for either left-hand or right-hand archers for added assurance and repeatability.

Headquartered in Fond du Lac, Wisc., Tru-Fire is largest manufacturer of bowhunting releases in the world. The products are proudly made in the U.S.A. The company is a wholly owned subsidiary of Feradyne Outdoors, LLC. For more information on the company or its products, write to: Tru-Fire, 217 E. Larsen Drive, Fond Du Lac, WI 54937; call 920-923-6866; or visit www.trufire.com. Like us on Facebook at https://www.facebook.com/TruFire.