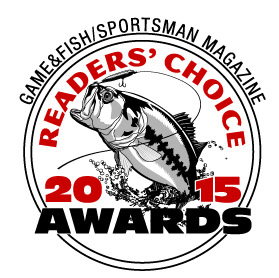 Kennesaw, Ga (Ammoland.Com) – Thousands of magazine readers chose 12 innovative fishing products — from rod and reels to lures and kayaks — as their favorites in Game & Fish/Sportsman’s fourth annual Readers’ Choice Awards, and those companies will receive honors and a trophy at ICAST in Orlando.

Winners in each category are:

A majority of the more than 2,000 respondents, representative of the magazines’ 5.4 million monthly readers, considered themselves expert or advanced anglers. The survey also revealed that, on average, Game & Fish/Sportsman fishermen spent more than 50 days fishing in the past 12 months, and a majority caught more than 50 game fish.

Complete results were published in Game & Fish/Sportsman magazines and are now online at http://gafmag.com/rca-2015-fishing

Game & Fish/Sportsman, is a network of nationally distributed magazines with more than 410,000 monthly subscribers and newsstand sales, and a total monthly readership of more than 5.4 million, according to Marketing Research Inc.

Editors Game & Fish/Sportsman had asked manufacturers to submit new gear nominees in 12 categories. The magazines then queried a large sampling of subscribers to determine favorite picks.