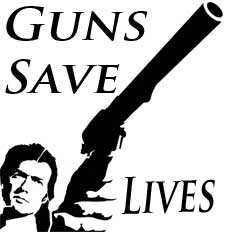 USA -(Ammoland.com)- Somewhere, everyday in the USA, 2100+ people use a gun for self defense, to stop a crime or save the lives of themselves or their family.

“We believe that the American public deserve to understand that on the average, guns save 2,191 lives and are used to thwart crimes every day,” says Alan Gottlieb of the Second Amendment Foundation

Most times you won’t see these tales on the news as it does not fit the main stream media’s story line of “Guns and Gun Owners are Bad“.

This is just one of those stories;

Rami Murrar, owner of Bouchard’s clothing store in Milwaukee, Wisc., was tending to his establishment when at around 4 a.m. a van smashed into the security doors and concrete posts protecting his store. A daring organized heist; after the van broke through the doors, three armed men attempted to gain access to the store.

Murrar responded to the threat by retrieving a semi-automatic rifle and firing at the armed intruders, striking one and causing all to flee. A short time later police caught up with one of the suspected robbers at a local hospital.

Following the incident, Murrar told a local news outlet, “It was a lot of guys out there. So I believe if they would’ve gotten through that door, I would’ve been dead, so that’s the reason I reached for my gun.”

Despite his successful experience with armed self-defense, Murrar made clear he did not relish the position he was placed in and showed mercy towards his attackers, stating, “I’m glad the guy made it. Again, I didn’t come to work that night or that day to kill somebody, so I hope he recovers from what happened, and he learns a lesson and be a good message for all the young guys out there.”

Every few days AmmoLand Shooting Sports News will be featuring a new report of stories involving self defense with a hand gun. Be sure and share, like and Tweet these posts and help spread the truth that “Guns Save Lives”. See more at www.AmmoLand.com ( http://tiny.cc/s6ef2w )

If these criminals were bold enough to arm themselves, steal a van and then smash through the shop’s fortified front door, then they most likely would have shot the business owner too. Our personal protection is something that should not be infringed upon by unrealistic expectations or naive anti-gun agendas of a few people. In the real world, policemen are responders after a crime is committed. Most police officers would like to be there to stop the crime while it is in progress and protect the law abiding citizens, but unfortunately that is not reality in most cases. That place… Read more »

It is a DAMM shame he has to have a lawyer there with him. Does to black and white trash public think the ******s have rights. WTF has happen to America??? The left and anti american will come up with some bullsh&t that the robbers right s were. I am sick of this sh&t. Good shooting black live matter ( SH&T )

Stupid Negroes brought a mini van to a gunfight.

I’m sure obammy’s son has health care I am paying for. And that he legally obtained his weapon like the rest of us….right?

It’s a shame he only got one of those ‘young black men’ whose lives matter so damn much !

These people need to shoot to kill. Wounding only passes these criminals on to another victim. I would have let them get into the store and then shot them all.