With the Russian bear on the prowl it is a good time to get comfortable with your rifle by adding the best AK Handguard to your Kalashnikova. 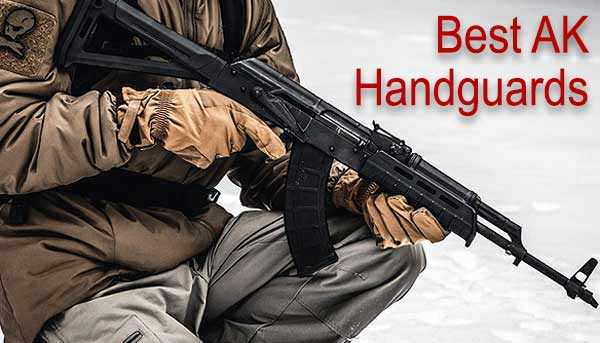 USA -(Ammoland.com)- Privet, Komrads! Not long ago, I wrote about the Best AK-47 Stock Kits.

Now it’s October, the anniversary of the Great Socialist Revolution of 1917. The air is crisp and cool and Mother Nature herself seems to be expressing solidarity with the proletariat – even the leaves are turning red!

It’s the perfect time to make a “Great Leap Forward” from the buttstock and look at some awesome AK Handguards for your Avtomat Kalashnikova.

As good as some of the capitalist replacement stocks are for the AK-47, sometimes it’s best to keep things simple. And there are not many things more simple than swapping out an AK-47 handguard, as this short video shows. Even your crazy old Democratic Socialist uncle (read Bernie Sanders) could probably figure it out and complete the task.

If you want to upgrade your AK-47 or AK-74, but don’t want to spend a lot of time doing it, swapping out the handguard might be one of the easiest, simplest ways to accomplish that task.

But always remember that the Party’s Ministry Of Truth is keeping close watch for any counter-revolutionary activities!

In the collectivist spirit of the “Five Year Plan” here’s a list of my 5 best AK handguards for your Kalashnikov:

If you think I left a worthy one out, please list it below in the comments.

Double Star Ace Railed Forend If you clicked on the video link I mentioned above, you saw that the example for how easy it is to remove a standard AK handguard and upgrade to a new one is the Double Star Ace. Made of aluminum, it’s rugged and lightweight. It has Picatinny rails on it, so you can easily mount optics, lights, lasers, or Double Star’s Tactical Bottle Opener for instant access to those imperialist soda pops we capitalist pigs are so fond of.

Troy Industries AK-47/74 Handguard Picatinny rails are the best thing since sliced black bread. But some Komrads would rather stand in lines for bread than put lots of Picatinny rails on their AK handguard. For those who prefer a smoother grip surface, the Troy handguards give you the best of both. The sides are smooth, but have holes that accept Troy Rail Segments, letting you put rail sections only where you want them. The holes also aid in cooling the barrel after extended firing.

Also, no matter if you get the short or the long lower handguard, both work with your Kalashnikov’s handguard retainer that usually has a built-in sling loop. There’s no need to break out the Dremel tool or a hacksaw and file when installing a Troy AK handguard.

Midwest Industries AK Handguards In true bourgeois style, Midwest Industries caters to our spoiled, decadent Western tastes by producing several different kinds of AK hangudards. You can choose from railed, smooth, or even M-LOK styles. You can get short ones or long ones, or even one set up specifically for an Aimpoint T1 Micro Red Dot. They even have colors to choose from – black or Flat Dark Earth.

Just like the first two handguards on the list, these install with no gunsmithing. In just minutes, your Kalashnikov can be fitted with a versatile handguard that will accept all sorts of capitalist accessories. What’s more, it’ll look really cool, too.

Magpul Zhukov Handguard I know I ranked the Zhukov stock set Number One in my previous AK-47 stock article. But I’m ranking the Zhukov in second place in my handguard article. The Zhukov handguard has a lot going for it. It really extends the surface area of the AK-47 handguard, which is great for modern-technique shooting, and really protects your hand against the gas tube which can get very hot during extended shooting sessions. It has slots to accept mounting rails, comes in a selection of colors, and looks really cool.

The reason I rank it second is because installation of the Zhukov requires you to permanently alter your AK by cutting off or otherwise removing the front handguard retainer that usually has the integral sling loop on it. If you don’t mind Dremeling that part away, the Zhukov might be for you.

If you do mind slicing and dicing pieces-parts off your rifle, well, there is an alternative.

Magpul MOE AKM Handguard Available in the same array of Magpul colors, the MOE AKM handguard is very simple to install, and fits neatly onto rifles with the sling-loop handguard retainer. Simply remove the top and bottom wooden handguards, and drop this one into place. It has M-LOK accessory slots on both sides, and a healthy internal heat shield to protect your hand during rapid fire.

That’s why I ranked it Number One – there’s no reason to hack anything off your rifle to install it. Plus, check that price (can you say stupid cheap?).

Even if your only source of rubles is from sweeping up at the Peoples Collective Tractor Factory, you can still probably afford an MOE AKM handguard for your AK-47. Of course, if you’ve already cut off part of your rifle, or own a rifle that never had a sling loop to begin with, there’s always the Magpul MOE AK version.

As you can see, if you want to add a long-eye-relief optic or red dot to your AK, or use some accessories like weapon lights, lasers or vertical foregrips, there are some really nice AK handguards out there. Pick out one you like, spend a few minutes installing it, and I guarantee you’ll be happier than a Young Pioneer with a new red necktie and shiny Lenin pin.

Thomas Conroy is a firearms aficionado, writer and AK owner who lives in the Midwest.