GROESBECK, Texas (Ammoland.Com) – Behind on the hunting season due to a serious accident last winter, Brian “Pigman” Quaca heads to Broken O Ranch in Texas for a stellar pig and blacktail combo hunt on Leupold’s Pigman: The Series. The game-rich environment gives Quaca a chance to harvest a blacktail antelope with a bow and a shot at a few pigs ransacking the land. Tune in to Leupold’s Pigman: The Series Sunday, October 25 at 8 p.m. 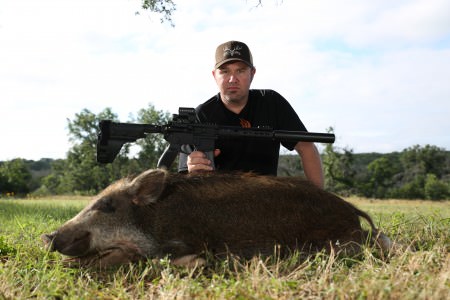 Life-threatening injuries from a car crash put the pig shanker three months behind on the hunting season. And with most hunting locations in Texas flooded out during the summer, Pigman must travel to dryer lands. As luck would have it, Quaca received an unexpected message on his Facebook page and jumps at the opportunity to hunt blacktail antelope in one of the only areas without floodwaters – Broken O Ranch in Lampasas, Texas.

“I may just do a whole season here and never leave,” quips Quaca after getting a tour of the immaculate ranch. “I’ve never stayed at a five-star ranch before, but this might be as close as it gets. And all of this is for me, none for you.”

The action-packed episode continues and Pigman not only goes after blacktail, but he will have a shot at taking down pigs on the land. “What I love about hunting is that no two situations are ever the same,” said Quaca. “Bowhunting for blacktail and pig hunting bring different challenges, but I was ready to take ‘em both down.”

About Pigman: The Series: Set deep in the heart of Texas, Leupold's Pigman: the Series takes viewers on a wild ride with its ever unpredictable and crazy Executive Producer and four-time Sportsman Channel Host of the Year, Brian ‘Pigman' Quaca, at the helm.  Now in its sixth season, Pigman: the Series has earned rank as one of Sportsman Channel’s top-rated shows by entertaining the masses with a plethora of hunts and locations.  Of course, Pigman's pursuit of pigs is always his love and passion, but don't think he isn't capable of sharing the love to any species who dares to step out in front of his sights. Pigman: the Series is Executive Produced by Brian Quaca and David Luce, in association with Duality Filmworks where David and Daniel Holechek serve as co-producers. Learn more at http://PigmanTV.com.

“Black buck” not “blacktail”. And the pigman and all involved really need to learn how to age deer before they shoot them. Stick with killing pigs my man.

I would like information on how i could schedule a hunt at the broken o ranch it looks amazing and I have 2 young nieces that are interested in hunting and enjoy eating venison and I encourage it.

Can you send info on the ranch? Interested in an archery blackbuck.

Would like more information on the ranch. Price, etc. for a pig hunt

I am a retired police officer and if the Broken O Ranch has too many doe’s, I will volunteer to help manage the heard.

Enjoyed the show. Myself and 3other retired policeman go hunting hogs once a year in Texas. The Broken O looks like a much nicer place. How can we research prices and reservations?
Thanks
Scott