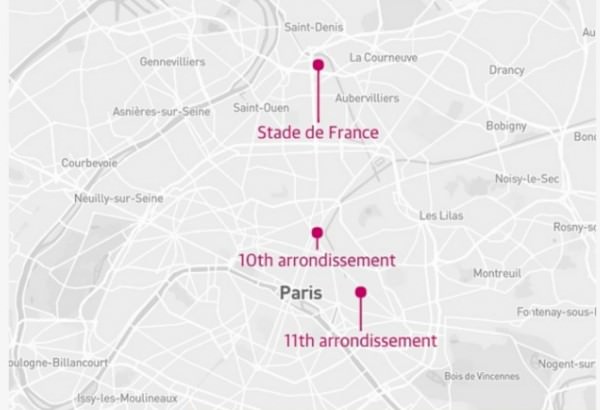 Arizona – -(Ammoland.com)- Breaking:  November 13, 2015.  Over 20 people have been killed in a mass public killing in France today.  The attacks are reported to have occurred at several separate locations, including the Petite Cambodge restaurant, the Bataclan theater, and in an explosion at a bar near the Stade de France.  The Frence President, Francois Hollande was at the Stade de France, attending a soccer match between France and Germany.

These are early reports.  It is likely that numbers and details will change as more facts become known and investigations proceed.

Update: The Guardian has reports that assailants shouted “Allahu Akbar”.  Other sources report the death toll may have risen to 60 or more.  From the Guardian:

Both of these areas are between the sites of the two attacks in the city – the former to the west and the latter to the east. That whole part of the city is popular with people out on nights out.
Another witness, who was at the Batalclan with his mother, is currently in tears live on the radio station. He says he heard the assailants were screaming “Allahu Akbar” while shooting inside the crowd.

France has strict hand gun laws, as we see in a country that has for civilian purposes prohibits full auto , weapons of war , grenades, bombs , well we see how immigration , firearms smuggling , destructive device making went into making a terrorist plot sucessful. Having police and military patrols is not personal safety , it’s cleaning up the mess afterwards. Allowing DAESH to continue to accummulate arms including U.S. made ones taken during DAESH’s Mosul occupation in which Obama’s Generals ordered troops to abandon the equipment. An arms depot was in fact GIVEN to DAESH. 2300 Humvees… Read more »

Skipper: How do YOU know it would have not made a difference? Seems like you are the expert in 12 year old fantasies.

The fact that Paris is not ‘gun free’ zone since the Jan 7-9 terrorist attacks earlier this year on French satire magazine ‘Charlie Hebdo & Kosher grocery store left approx. 16 people dead. Paris in the aftermath of these attacks have military & security forces armed to the teeth with automatic weapons & body armor walking the streets day & night throughout the neighborhoods and many of the exact same districts attacked recently. Your fantasy about a good guy with a ‘concealed carry’ gun would have made a difference is a 12yr olds fantasy.
pls gtfoh

Coming to a location near you Very soon! Carry always, bar NONE! An extra reload or 2 may prove helpful.
Our little king is in the process of ensuring these disturbing occurrences with the importation of military age muslims from the war zone.

Is this French Incident foreshadowing the future horror within the USA. This Administration is for the continued importation and granting Political Asylum to hundreds of thousands more questionable, non vetted, highly probable, radical Islamist falling in with the millions here already. These “Syrian Refugees” are most all fighting age young Muslims. In comparison, there are not many Christian Refugees among those being admitted. It behooves me how quiet the public is about this rogue Administration not taking into account to arm the huge Christian population in Syria so they can be able to defend themselves against ISIS. Then on second… Read more »

The liberal/progressive/muslim in the Whitehouse wants to import 250,000 of these bastards every year? And the belly crawling bitch from Arkansas wants to take away your right to defend yourself once it slithers its way back into Washington. I hope the brain dead on the far left are starting to get the message. After Europe were next..

Aloha Snackbar!! I look forward to seeing things like this happening in America, due to the fact that our government, schools and media have been force feeding us the nonsense that islam is the religion of peace and we better accept them. Every time that islam takes a majority they begin to lash out like this. Forcing their sharia law on the local population they have taken over. This sort of occurrence probably already would have happened in our Country if not for the fact that we still have the Second Amendment. Keep your head on a swivel folks!

“Necessity is the plea for every infringement of basic human liberty. It is the argument of tyrants; it is the creed of slaves.” William Pitt Late of the British House of Commons

“Those who would give of essential liberty to purchase temporary safety, deserve neither liberty nor safety, and will eventually loose both. Benjamin Franklin

Well, there are several circumstances remain self evident no matter where you are. 1) Gun free zones STILL don’t work anywhere- even in other more advanced progressive gun free countries. 2) Criminals prefer UNARMED defenseless victims – and lots of them in this case. 3)The ONLY thing that stops evil perverts like this is a good guy with a gun. Too bad he was from the gubmint and ONLY minutes away. 4) There is no rationale or logic to reason or compromise with cancer or feral humans intent on taking innocent life by any means necessary, therefore be proactive to… Read more »

Accepting all those refugees will have not consequences , back round checks will find any bad people.All the LIES GOVERNMENTS tell and now it will be in the name of security we need to void every ones rights.
Keep going down this road it only leads to self destruction of man.