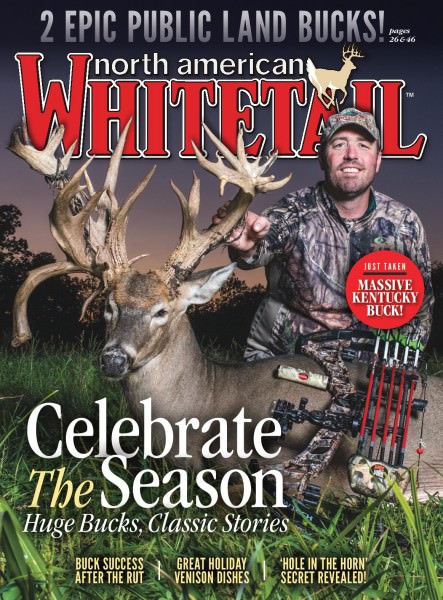 In total, there are eight amazing record-book whitetails profiled in this issue. With so much unique content featuring real-world giants, it’s little wonder the theme of this issue is “Celebrating the Season.” These great deer deserve to be honored, as they represent some of the finest taken by hunters across the continent during recent hunts.

That theme also applies to another feature in this issue: preparing a trio of great venison recipes that will enhance any holiday table. Add a dash of late-season hunting advice from two experts and the result is an issue perfect for brightening hunters’ sometimes-dreary days of early winter.

“Our readers are among the most avid hunters,” points out North American Whitetail editor in chief Gordon Whittington. “Deer season doesn’t last all year, but thoughts of it are with our readers every day on the calendar. So even though much of the 2015 hunting season now is behind us, we know interest in a wide range of deer-related content remains high. The special features in this issue will satisfy the hunger for unique, timely information on North America’s most popular big-game species.”

The December-January cover features a buck that actually was harvested in September 2015, during the first week of Kentucky’s archery season. Bowhunter Austin Musselman took the 33-point behemoth from a ground blind — and captured the scene on video. The deer ranks as one of the world’s greatest wild whitetails shot on camera.

And there’s another amazing twist to the story of this gargantuan buck: Austin arrowed him just 30 yards from where, as a boy, he shot his first-ever whitetail. It happened on the family farm in northern Kentucky, a piece of land long neglected but recently turned into a hotspot through sound habitat and herd management.

“Every landowner and private-land hunter who plants a food plot, manages timber or works to balance the deer herd dreams of one day being rewarded with a world-class buck,” Whittington stated. “For Austin Musselman, years of effort to rebuild the family farm yielded that memorable result. It’s a testimony to what he and his family have done, and it shows that sound management can have a huge payoff.”

Not every monster is the result of intensive management on private property. Two of the state-record whitetails in this issue — one taken with muzzleloader in Minnesota, the other with bow in West Virginia — prove you don’t necessarily need exclusive access to bag a stunning trophy.

“Sometimes it’s easy to get the idea the biggest bucks are reserved for those with the deepest pockets,” Whittington points out. “But sometimes, it’s just a matter of combining skill, time and effort to the quest. The whitetail is the one big-game species that gives everyone a fighting chance at a trophy, regardless of their financial situation.”

Learn more about North American Whitetail at http://northamericanwhitetail.com and on Facebook at https://www.facebook.com/NAWhitetail