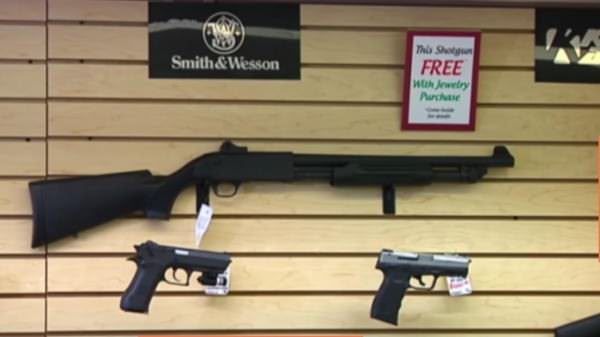 In Deland, Florida, the Downtown Goldsmith & Engraving and 2nd Amendment  Firearms are two stores with the same ownership and under the same roof.  They are owned by a husband and wife team who started the business three years ago.  They have been offering the promotion for all three years.  From wtsp.com:

Czerok says she hasn’t gotten any negative response, adding that background checks are made for every gun that goes out the door.
“We are doing everything you legally have to do to purchase a firearm.  So, these are not just going on the street to anybody,” Czerok said.

The store owners say they may need to order more shotguns before the promotion ends.

The shotgun offered is a Stevens shotgun model 350 Security Pump.  Here is a description from Cabela’s:

The jewelry end of this purchase offer is not as expensive as a car.  From insider.foxnews.com:

“This kind of gives the guy an incentive to purchase a piece of jewelry for his wife, or vice versa. We’ve sold a couple of gentlemen’s ring and the wives got the shotgun,” owner Jesse Czerok said.

Second Amendment Supporters are winning the culture war when offers such as this become mainstream stories across the country.  The story has been featured in The New York Daily News, Fox and Friends, and numerous other media outlets.  Firearms sales have been setting records for the last eight years.  2015 will be another record year, almost certainly eclipsing 2013, when over 16 million firearms were added to the existing private stock in the United States.  In 2013, the National Instant Check System (NICS) processed over 21 million checks, some of which were for concealed carry permits.  Some checks can also be for the purchase of multiple firearms.

The NICS system had processed nearly 20 million checks by the end of November.  Less than 2 million checks are required to break the existing yearly record.  It is likely that the number of checks done in December of this year have already surpassed that number.
Downtown Goldsmith & Engraving in Deland, Florida, will be offering the same deal on Valentine’s day.

they have been doing that, with a Benelli shotgun, at Krieger jewelers in Appleton Wisconsin,for at least 10 years around deer season in november