Not a GOA member yet? You can join Gun Owners of America today for only $20! 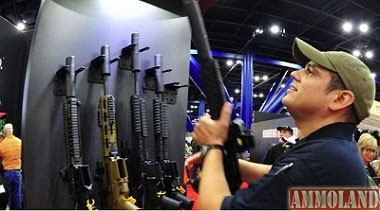 Washington, DC -(AmmoLand.com)- ACTION: Contact your Representative NOW and ask him or her to co-sponsor H.R. 3799, a bill that restores your right to buy suppressors for your firearms.

Rep. Matt Salmon (R-AZ) has introduced the Hearing Protection Act, H.R. 3799, which restores your right to buy suppressors for your firearms.

Under Salmon’s bill, anyone who can buy a gun can buy a suppressor.

It also waives the $200 fee previously needed to get a government permission slip.

Suppressors protect the hearing of shooters, including the young and hearing impaired.  They are of no value to criminals or mass shooters, and even homemade suppressors are rarely used in crimes.

They are effectively banned for one reason — because gun grabbers want to make it more difficult for gun owners to exercise their rights.

The irony of the whole situation is that items like suppressors actually increase the safety of shooters because they reduce the noise that is generated when operating a firearm.

Perhaps most ironic of all is that in countries like Norway, which have strict gun control on all firearms, purchasing and using a suppressor is very easy. They can be easily bought over the counter like we buy scopes or slings.

There is a lot of gun control needing to be repealed in this country, and the restrictions on suppressors should be at the top of the list.

Your right to own a suppressor isn’t just a fundamental right protected by the Constitution, it makes target and sport shooting safer for many Americans.

Contact your member of Congress NOW and ask him or her to co-sponsor H.R. 3799.

About Gun Owners of America (GOA):

Gun Owners of America (GOA) is a non-profit lobbying organization formed in 1975 to preserve and defend the Second Amendment rights of gun owners. GOA sees firearms ownership as a freedom issue. `The only no comprise gun lobby in Washington’ – Ron Paul

Just like the Left got us here, we’ll get back to where we belong. One step at a time.