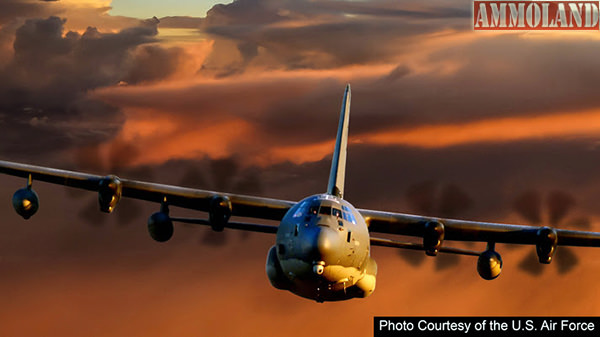 Nashua, NH -(AmmoLand.com)- BAE Systems has been selected by the U.S. Special Operations Command (USSOCOM) to develop a new electronic warfare system for the fleet of C-130J aircraft.

The contract, worth more than $20 million, is the first phase of a multi-phase program to upgrade aircraft system survivability and the capability to detect, identify, locate, deny, degrade, disrupt, and defeat threat systems in operational significant environments. The life cycle value of the contract is expected to exceed $400 million.

“This award is a significant milestone as it not only builds on our strong electronic warfare legacy, but also extends our proven electronic warfare capability to a large platform aircraft,” said Brian Walters, vice president and general manager of Electronic Combat Solutions at BAE Systems. “Our all-digital RFCM system will ensure the mission-critical C-130J fleet remains capable and protected in the harshest environments.”

Designed to be integrated into both the MC-130J Commando II and the AC-130J Ghostrider aircraft, the RFCM system will support the varied and critical missions of Special Operation Forces. These missions include the use of C-130Js for armed over-watch and refueling of helicopters in denied territories, and for close air support and interdiction missions in the most sensitive and hostile of territories.

Under the terms of the contract, BAE Systems will provide product development and platform integration work over the next 12 months.

Additional information regarding the company’s RFCM solutions can be found at www.baesystems.com/C130-RFCM.

BAE Systems has more than 40 years of experience with Mk 45 Mods 0-4, including more than 260 deliveries to the U.S. Navy and 10 fleets worldwide. The company’s Louisville facility houses its Naval Guns Center of Excellence for Naval Gun System manufacturing, providing component and spares fabrication, as well as final system assembly and test of new and modernized Mk 45 Naval Gun Systems.

Does this include satellite communications and weapons in satellites?

No one wants, or is allowed, to admit the REAL problem, even those of us who know the source of the problem! There is very little Personal Integrity in today’s United States, that goes from the bottom to the top! Far too many American parents fail to teach their children the DYNAMICS OF MORAL AMERICAN CITIZENSHIP! Why, because they know nothing about good citizenship! We’re a “if it feels good, do it” society. We are forbidden to state the real facts! Without acknowledging the real facts, we can’t solve the problems. Perhaps resurrecting the DRAFT where young people are accountable… Read more »