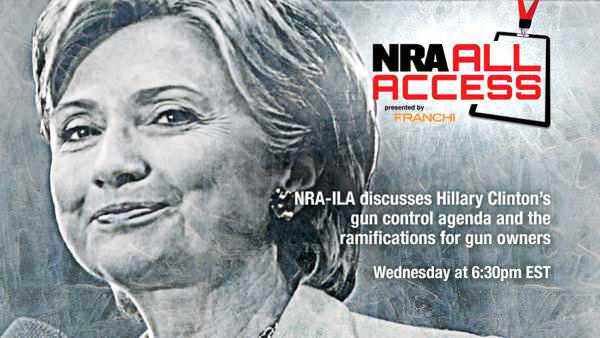 Fairfax, Va. — (Ammoland.com) With the 2016 presidential election coming up, NRA All Access sits down with the NRA Institute for Legislative Action as they discuss Hillary Clinton’s gun control agenda and the implications if she were to win the election.

Later in the episode we explore the longtime friendship between the National Rifle Association and Boy Scouts of America, which has seen millions of young men learn to shoot both safely and responsibly. Find out how it all began and where the future leads.

Wrapping up the hour of great television, Phil Schreier and Jim Supica profile the iconic guns of of the First World War on NRA Gun Gurus before examining a long lost percussion shotgun and 1875 Remington revolver. Finally the boys wrap up by watching a rare Henry rifle get auctioned off at the Rock Island Auction house.

Catch these exciting episodes of NRA All Access Presented by Franchi and NRA Gun Gurus Presented by Henry Repeating Arms, back-to-back at 6:30pm and 7:00pm EST Wednesdays on Outdoor Channel.

If she gets elected and passes laws to disarm everyone, then everyone should do what the “assault rifles” owners did in Connecticut. Out of 350,000 assault rifles in Conn., only 50,000 we’re turned in. Mostly by little old ladies whose husbands had died and they didn’t know what to do with them anyway. The rest of the owners flipped Dannel Malloy (and Eric Holder) the bird. They know that any law that violates the Constitution is null and void, and it is if it never existed. Get the DVD Molon Labe, it explains the whole thing. ALL of the gun… Read more »

I worked at Pepsi Cola plant employee in St.Louis for 27 years and retired. If Hillary becomes President this America as we know it our freedom is gone. The Union workers need to wake up even our school teachers. This country needs to turn back to God . I am even talking to the so called church.

Hilary is pure anti-american evil. Her plan to gut the constitution in nothing short of treason! Her only loyalty is to the socialist (communit) elements of the world . Plus Any one that is wiling to give her tons of money for pushing their agenda of destroying America her record speaks of abandoning Americans in harms way just as her husband did to our men in Mogadishu ! Being that evil how can anyone think she has any qualifications to lead our country. If she wins get ready for the end of America a sad sad day she wants total… Read more »

Hillary wants us disarmed yet gave MISSILES , machine guns, and other assorted weapons to Libyan TERRORISTS Who GAVE THEM TO DAESH .So where’s their background check. Same old government song and dance. Screw the American worker he can flip burgers and make it join the auto industry in Mexico.