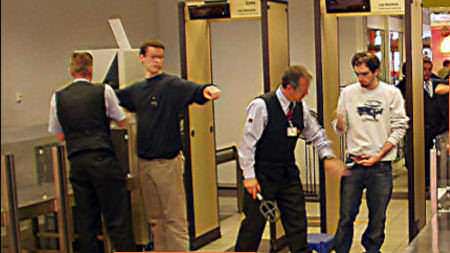 Arizona – -(Ammoland.com)-
In 2015, the Texas legislature passed a change in Texas statutes that prohibited government entities from posting signs to ban people who legally carried guns in areas where they are not banned by Texas law.  From the Texas statute 411.209:

(a)  A state agency or a political subdivision of the state may not provide notice by a communication described by Section 30.06, Penal Code, or by any sign expressly referring to that law or to a concealed handgun license, that a license holder carrying a handgun under the authority of this subchapter is prohibited from entering or remaining on a premises or other place owned or leased by the governmental entity unless license holders are prohibited from carrying a handgun on the premises or other place by Section 46.03 or 46.035, Penal Code.

Exceptions to the law are listed in Section 46.03 or 46.035.  Among the exceptions are courthouses.

During the United States occupation of Iraq, the Green Zone became famous.  It was a heavily fortified zone with limited entrances.  People coming into the Zone were searched for weapons and contraband to reduce attacks on people inside of the zone.  It appears that some Texas polities are attempting to test if they can create their own “Green Zones” if they have a court hold occasional hearings inside of their administrative complexes, declaring the entire administrative complex a “courthouse”.  McLennan  County is one such entity.

The McLennan County commissioners have directed their attorneys to fight the law after being informed that they are in violation.  The process for filing a complaint is clear.  It is obvious that the County is in violation of the law.  From the wacotrib.com:

The move comes in response to a letter from the Texas Attorney General’s Office on March 30 saying the county must remove signs at the entrances of the courthouse and annex because the weapons ban violates state law. The letter stated that the county cannot prohibit licensed handgun holders from entering an entire building simply because the courts, or the offices of the court, are located in a portion of a multipurpose building.

The District Clerk’s Office of McLennan County is located on the 3rd floor in the Annex building to the main courthouse. To access the building you must enter through security in the main courthouse, go to the 3rd floor and cross the crosswalk to the annex. The District Clerk’s Office is located immediately adjacent to the cross walk.

Special Assistance
If you require special assistance in obtaining services from the District Clerk’s Office please contact the office at 254-757-5054 or 254-757-5057. Handicap access to the building is available through the entrance in the alley between the main courthouse and the annex. Call for assistance prior to attempting to enter the building as there are security procedures that must be maintained.

The City of Austin is also claiming “Courthouse” status for its version of the “Green Zone”.  In Austin, Michael Cargill is challenging the practice.  From fox7austin.com:

But Cargill says since the city is still giving him verbal notice that he can’t carry in the building, he’s filed another complaint.

“I’m fighting hard for this because this is a city and state government agency.  And for some reason they’re not following the law,” he said.
In response, the City of Austin sent a statement saying:

The city’s position on guns at City Hall has remained consistent.  It is a criminal offense under Texas state law to possess or carry a weapon, including a handgun carried by a person licensed to carry it, on the premises of a government court or offices used by the court.  Because a part of the City of Austin Municipal Court conducts court proceedings in the Austin City Hall building, and the city maintains an office at City Hall for the chief municipal court prosecutor, we believe state law prohibits possessing or carrying a weapon in that building (except by law enforcement personnel).

I have written previously that the Benbrook police station has also posted 30.06 and 30.07 signs, based on the theory that the presence of an occasionally used municipal court allows them to ban legally carried firearms from the entire building.

The issue seems destined for the courts.  Attorney General Ken Paxton has been firm in his response.  McClennan County is likely to be the test case.

The AG office has sent McClennan County a letter demanding that the County comply with 411.209, or present detailed information as to why they are exempt.  They have until 15 days of receipt of the notice, which is dated the 30thof March, 2016.  Given that it may take a few days to serve the notice, and that the County has directed its attorneys to not comply, we should be seeing further actions shortly.