Washington DC – -(Ammoland.com)- During an April 15  2016 interview on the set of Barbershop: The Next Cut, actor Ice Cube said he will vote Democrat in the upcoming presidential election as a way to ‘put a lid’ on gun manufacturing.

VH1 posted a video of Ice Cube answering questions about gun violence, the upcoming presidential election, and the Black Lives Matter movement in which he said:

One thing the government can do to combat gun violence is put a lid on the manufacturing of guns. I think we have enough guns on the streets. I think they need to really regulate the manufacturers and hopefully not make so many guns and not manufacture so many weapons.

The candidate that I think is most effective to help the situation has got to be one of the Democrats ’cause it seems like the Republican Party is really, you know, an advocate for guns and the Second Amendment. I believe in the Second Amendment, but we got to have some common sense with it. It’ll be either Bernie or Hillary. I’m still not sure who I’m supporting. We’ll see.

Ice Cube then spoke about Black Lives Matter and said he sees the movement as important for reasons other than run-of-the-mill “gun violence” and “black-on-black crime.” He said Black Lives Matters is about “authorities killing citizens,” adding, “It’s a whole different thing when the government or the system is killing you as a citizen, and that’s why we need to speak up.”

The irony in his words is so thick I am choking on it. ~ AmmoLand

AWR Hawkins is the Second Amendment columnist for Breitbart News and political analyst for Armed American Radio. Follow him on Twitter: @AWRHawkins.

Punk….. makes money on violent movies and then says this

Unfortunately, most blacks in the United States (at least the ones speaking out on firearms) apparently haven’t researched the history of their people in this Country. Frederick Douglas, in 1867, made a speech in Washington, D.C.. free man has to help keep free are the ballot box, the jury box, and the cartridge box. He, like most black leaders after the Civil War, advocated strongly for blacks having access to and the right to carry firearms for their own protection. Over the last 150+ years we have consistently seen the Democratic Party do nothing to protect minorities, and frankly, their… Read more » 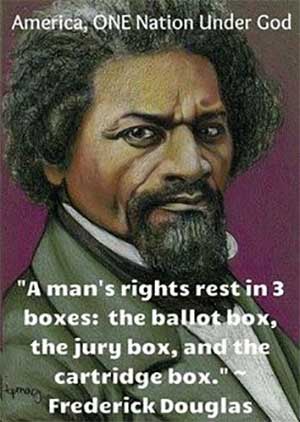 So Ice Cube is now a spokesman for the Democratic Party’s ‘Monochrome Coalition’. Is anybody surprised by that?

Hey DirtBag; the only lid that needs to be put on, is the one on U’r coffin!

My opinion is that we do not need a democrat any where…..they work with blank checks , raise taxes, and who knows what else. More so in NC (gas prices went down, and that idiot Bev. Purdue raised gas tax every time) just one example. As for Black Lives Matter (what a joke), blacks need to find out what it means in NC , every day in Durham any way that’s all you hear, 4 yr. olds 5&6 yr. olds and babies getting shot by blakcs. I’m black, and a retired MARINE 30 yrs., 4 combat tours (Dom. Rep, 2… Read more »

Rap culture has been is the worse product that America has ever produced both locally and internationally. Violent, self loathing rap music in the last twenty eight years has only produced a thriving drug culture along with a lot of body bags.

I’ve got message for Ice Cube, “Go fuck yourself, you retarded sellout.” He should be taking notes from a fellow artist who’s not such a bitch: Ice T.
It’s no wonder, after seeing that rehashed blacks-ploitation garbage barber shop movie he’s put out recently, not to mention all the other crap he’s vomited out over the years. At least Ice T is true to his school and understands what basic freedoms are about.

It really disappoints me how much he’s sold out.

Vote Democrat ….. get your entitlement.

What dart vg idiot!!! He wants to put more us workers and companies out of work and business. I suppose he’s willing to pay the lost taxes and wages he is exactly what’s wrong with America . To many idiots helping the communists and other enemies of America. Cn we find a way to send him to North Korea for a rude awakening and rid us of this useless idiot.

This clown is a big POS and totally void of any talent. The best thing he can do is continue to sit around with his gang banger homies smoking dope and praising the communist muslim in the white house. Only 275 days and the USA will flush the country’s toilet and be rid of the muslim racist.

Yeah, great idea. I wonder what would have happened if the British would have put a “lid” on weapons manufacturing in 1775.
What a dumbass thing to say. Showing his ignorance.

I wonder how many police offices and children have been shot and killed via the influence of the crap this [email protected] puts out under the guise of talent?!!?!?

I’m a big fan of Cube, but he appears to be saying what his bosses want him to say – the ones who ‘allow’ him to work in Hollywood. I can see his dilemma. A lot of actors and musicians in Hollywood are forced into hiding for their conservative beliefs. He obviously doesn’t have a problem with people buying guns:
http://bit.ly/1SiLKuJ
http://bit.ly/1SqQelv

His boss’s are telling him to say this, OK. You mean Hillery and Bill and Obambam ? Ya most likly he don’t think that way it’s his boss’s, aha, OK.

We need a lid put on idiots like him.
Taking guns away from good people is not going to keep guns away from bad people.
But he knows that.He wants to make it easier for criminals.
I guess he doesn’t realize,he will be the first one to lose possessions and family.
He might change his mind when he gets hit.

Ya and it should be a coffin lid.

Raymond Miller, With those comments you have made not only does it imply that you are racist and Ignorant as hell, but also Implies that you are the Idiot who should probably not possess a firearm. The way you processed the Information seems way out of context! It would do you and everyone who comes in contact with you a great service if you educated yourself!

Yes I am and it is people like your heros that have made me one. If Obambam can be a racist why can’t I be one. Why can’t I do a song calling for the killing of blacks and the raping of black women. Murder blaclie instead of whitie. You know damned well why I can’t do that, because the self rightious left would have me in jail for insighting a riot.

He’s essentially reaching out to his gang member fans to vote democrat so when the legal guns are confiscated, they will have the upper hand when they kick in your door to rob and kill.

I could only watch a few seconds of his video before I had to shut it off. His misguided ignorance was also hypocritical, since he had no problem with guns in Ride Along 2. God forbid that he say we need to get the gang bangers off the streets, but that would cut into his record sales.

I wouldn’t waste my time watching anything put out by this or any other N—-r. They are stupid, and evidently like being so.

How about we regulate ICubed’s movies. Liberals don’t get it and never will. Since he want’s to mess with the constitution how about we limit his free speech, or arrest him with no reason. I’m sick of hearing how they think they know everything and nobody else’s thought matter.

Yah, Voting Democrat has really worked wonders for Blacks, hasn’t it ? You are about the dumbest SOB’s in the history of the world. The Democrats have been lying to and using you for 100 years and you are to stupid to put 2 & 2 together. Now they are importing a new crop of voters to replace you,and they are taking your jobs away from you. Yet idiots like this guy keep voting for the B—-tds who are and have been destroying you and your families. The Cl*t-tunges and their ilk insult you and you just lap it up… Read more »

Malcolm X agreed with you, and shortly after he called on black Americans to wake up and stop wasting their votes on Democrats that only want to use them, he was killed. Imagine that.

No one is taking Ice tees job. he dun suckered his bros to send him da money you get from momma’s welfare check and he has his guns so listen to dis roads scholar he be wit it.

ANOTHER so called enter-taint. WORTHLESS POS as far as Im concerned.SHOVE your stupid opinion you moron. Stay away from me and mine. Another reason I have NEVER listened t your garbage or watched it.

Where did this Slimeballl get his guns? Obviously he does no remeber that it was on the street (Black Market).

When you see him on TV or hear him on the radio, or any other such JERK,, change the channel!

NO MORE MOVIES WITH GUN VIOLENCE, THEY ARE NOT FOR THAT. IT WOULD COST THEM MONEY. IF WE ALL HOLD THESE PEOPLE ACCOUNTABLE BY NOT SUPPORTING THEIR MOVIES OR MUSIC THEY MIGHT GET THE MESSAGE.

This guy is a walking, talking oxymoron. “The government is abusing citizens so disarm the people”. I wonder how, exactly, he would feel about his right of free speech if someone suggested that his form of entertainment, rap “music”, was harmful to our society and should be severely limited. Think I’ll ignore the ignorance of Mr. Cube and stick with the statement by IceT, (paraphrased)”The Second Amendment is there to protect the people from tyranny”. Nuff Said

What a hypocrite. As a founding member of NIGGARZ WITH ATTITIUDE and a co-writer of “Fuck tha Police”, Ice Cube personally helped to further destroy black families and American culture by glorifying black gangsters and gun violence.
As far as Black Lives Matter, they are as racist as the Ku Klux Klan and like the Klan, they are evil.

Crap for lame asses to believe…….entertainers with their know more platitudes but actually know nothing except how to sell themselves……. and their product.

What else would you expect from a 2 bit gang member? He’s the first one to call the police when someone does something to him though. You can bet he has his guns and isn’t giving them up.

Perhaps ghe government could put a lid on the production of any more (c)rap music. That would probably reduce black on black ghetto violence more than any other proposal I’ve heard…