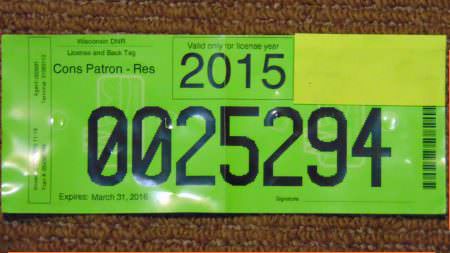 Arizona – -(Ammoland.com)- In 1942, Wisconsin required deer hunters to wear a back tag so that they could be identified at a distance.  The exact what purpose of the new regulation is not clear.  It may have been related to WWII, because the back tag regulation was put in place between Pearl Harbor and the first deer season that occurred after the start of the war.  Perhaps Wisconsin legislators feared armed German or Japanese agents roaming the Wisconsin North woods.  Perhaps it was simply part of the Roosevelt push to create more bureaucratic administrative control over all aspects of life.  Wisconsin was a center of “progressive” thought.  The back tag requirement was a law passed by the legislature, not a regulation imposed by the Wisconsin Fish and Game department.

It gradually became known that back tags were not very useful.  By 1994, there were only 11 states that required a back tag for hunting.  by 2005, the number had dwindled to 5 states.  By 2016, only Wisconsin and New York still had the antiquated statute.  from huntingny.com:

According to Sunday’s “Outdoors” page, seems that their is pending Legislation on eliminating back tags in NYS. Guess New York and one other state are the only ones left with this stupid requirement.

Hope it passes……always thought it was a dumb idea to begin with. Besides, most outdoor wear doesn’t have provisions for pinning your tags to anyway.

This year, Wisconsin legislators eliminated the law. The back tag pictured from 2015, will be the last of a series.  No back tags required for the 2016 deer season. From greenbaypressgazette.com:

When Wisconsin’s bear and deer seasons open this fall, hunters will head to the woods without pinning a state-issued identification tag between their shoulders for the first time since 1941.

Yes, the backtag is dead. Good riddance. Those silly, indestructible 3.5-by-9-inch irritations have been a prominent but oddly popular part of our deer hunting heritage since the Legislature mandated their use in the 1942 season.

Some people claim that the back tag was created to allow for easier complaints about trespassing of hunters on private land.  If that were the case, why weren’t they required for all hunters?  I doubt if anyone knows for certain.  Maybe there is some old legislative history in a dusty legislative law reference from the 1940’s, down in Madison.  I would love for a lawyer who has access to such a resource to send me a reference that would help understand what the legislators were saying about the issue in 1941/42.  I know that the war was heavy on most peopels’ minds.

This year, Wisconsin deer hunters will be able to celebrate another little bit of freedom.  No more back tags!

Wisconsin has a lot to be proud of in the last few years.  Since 1996 they have enacted a strong Constitutional protection for the right to bear arms.  They passed one of the least restrictive “shall issue” concealed carry permit laws.  They cemented protections for open carry rights that existed since the state was formed.  They have removed all the stupid restrictions on the carry of kinives that have been accumulated in the last 60 years.

Thank you for the Information, I have hunted in my home state since 1970. Now I don’t have to worry about that back tag. I moved to a warmer climate, so now when I go back home this fall to hunt no worrying about the back tag requirement.