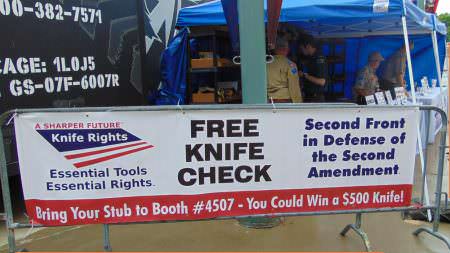 Arizona – -(Ammoland.com)- Open carry is unrestricted at the NRA annual meeting in Louisville, Ky, this year.  But with presidential candidate Donald Trump speaking at the Leadership Forum, the Secret Service set up a system to stop the entrance of people with guns and knives.  Doug Ritter of Knife Rights realized that the carry of pocket knives is common with people across the United States, and that it is a major inconvenience to trudge a half mile back to a parked car to deposit a pocket knife after walking through a quarter mile line to hear the speakers.

The procedure was simple.  Hand a friendly boy scout your knife or knives.  They would put them in a zip lock bag, with a ticket that you kept a stub from.  If you wanted, you could take a picture of the knives in the bag as an alternate way of recovering them.

As a bonus, the ticket to pick up your knives at the check in station could be turned in at the Knife Rights booth, #4507 for a drawing to win one of two $500 knives. A steady stream of customers came up to the knife rights check in station to take advantage of the free service offered by Knife Rights.  I saw a significant number of knives being checked in.  I tested the system with my own Cold Steel Voyager XL, which has always worked well for my needs.  I had no trouble retrieving my pocket knife, and I expect that no one else will either.

Doug Ritter was helping man the booth.  He has created Knife Rights from  the ground up, and admitted that the brilliant idea had been his.  He demonstrated what a small organization can accomplish in short order.  From the moment of conception to use at the NRA meeting, his Knife Check station was put into operation in one week!
Knife Rights say they are fighting on the second front in defense of the Second Amendment.  They have had amazing success, rolling back infringements on the Second Amendment that were put in play over a hundred years ago, at the start of the “progressive” era.  They have had success in over a dozen states, and are currently pushing knife reform laws in another eight states and the federal government at present.

In Wisconsin this year, they eliminated the switchblade ban from the 1950’s, put in place a broad knife preemption bill that standardizes knife laws across the state, removed the prohibition on concealed carry of knives for anyone who can possess a firearm; and eliminated any bans on the open carrying of knives in most places.

Knife rights has even pushed and passed knife reform at the federal level, though that is a tougher sell.

I have talked to Doug Ritter when we have been at events such as the NRA annual meeting.  He has shown himself to be honest, approachable, and principled.  He has demonstrated integrity.  The legal and philisophical waters seem ripe for reform of knife laws across the country.  Most legislators are astounded that these antique infringements on the Second Amendment are still on the books.  Knife Rights has won victory after victory.

They accomplish all this on a shoestring budget.  What they might accomplish with a couple hundred thousand a year boggles the mind.