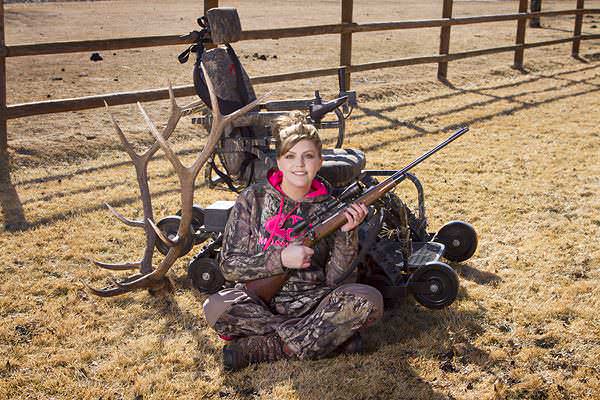 Women from around the globe were invited to submit a 500-word essay describing why they are an extreme huntress, and the essays were evaluated by a panel of judges to determine the semi-finalists. Lundvall, of Cody, Wyo., was selected as one of the semi-finalists.

The Extreme Huntress competition is about preserving our outdoor heritage. Its goal is to create positive role models for women who want to participate in hunting. Now in its eighth year, the competition is wildly popular among contestants and fans. The Extreme Huntress competition continues to set the bar for serious outdoors women, while at the same time providing positive role models for women who are new to hunting, shooting and other traditional outdoor sports. In addition, by preserving our outdoor heritage for future generations, we ultimately create more conservation stewards for wildlife and their habitat.

“I am honored to be included in a group of such amazing fellow huntresses,” Lundvall said. “I am looking forward to the opportunity to gain the needed public votes to represent Wyoming and female hunters everywhere at the competition in July. Hunting is a huge part of who I am, and I love sharing this passion with others. I live an extreme, redefined life, and I would enjoy the chance to show the world that you alone can define your abilities.”

After a paralyzing ranching accident when she was just 16 years old, Lundvall’s greatest fear was that she wouldn’t be able to enjoy the outdoors. She has been leading the charge to redefine her life from her wheelchair and adapt to the outdoors lifestyle she loves. Lundvall is an inspirational speaker, author, and avid outdoors woman with a passion to encourage and empower individuals, regardless of their abilities, to get outside and enjoy the Great Outdoors. When she isn’t tracking big game through her beloved Wyoming mountains, Lundvall is speaking and educating others about hunting, conservation, disability awareness, as well as consulting businesses on adaptive recreation equipment.

The next phase of the competition involves a public vote to determine the six finalists. Beginning 12:01 a.m. MST, May 1 through 11:59 p.m. MST, June 1, the Extreme Huntress™ website will allow the public to vote for their favorite huntress. On June 2, the six (6) participants with the highest combined score, (judge and online votes) will be invited to the famous 777 Ranch in Hondo, TX to compete July 10-15 in a hunting and skills competition.

The public can follow each contestant and the competition on the Extreme Huntress app (available on iTunes and Google), as well as on Facebook (https://www.facebook.com/extremehuntress/) and Twitter (https://twitter.com/xtremehuntress). Learn more about Ashlee Lundvall at www.ashleelundvall.com.

Haas Outdoors Inc. is headquartered in West Point, Miss., was established in 1986 and is home of Mossy Oak. Celebrating 30 years in 2016, Mossy Oak is a leading outdoors lifestyle brand that specializes in developing and marketing modern camouflage designs for hunters and outdoors enthusiasts. The Mossy Oak Brand and patterns can be found on a multitude of products worldwide. Haas Outdoors Inc. is the parent company of Mossy Oak, BioLogic, Mossy Oak Productions, MOOSE Media, Nativ Nurseries, Nativ Living, GameKeepers, GameKeepers Kennels and Mossy Oak Properties. Mossy Oak is the official camouflage of the National Wild Turkey Federation and Ducks Unlimited.