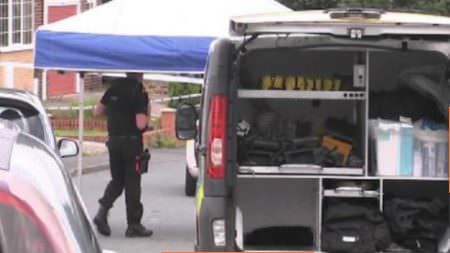 A British Labor MP has been murdered when she intervened in an altercation between two men, one of whom has been reported to have mental issues.  Witnesses at the scene reported that the gun used appeared “homemade”.  A knife was also used.  The MP was reportedly shot three times and stabbed several times.  From uk.businessinsider.com:

An eyewitness report given to the BBC said that Cox was attacked after becoming involved in an altercation between two men.

“There was a guy who was being very brave and another guy with a white baseball cap who he was trying to control and the man in the baseball cap suddenly pulled a gun from his bag,” the witness said.

The gun was “homemade” and large, according to multiple reports.

“It looked like a gun from, I don’t know, the First World War or a makeshift, handmade gun. It’s not sort of like the kind of gun you see normally.”

Another witness told Sky that a man in white, dirty baseball cap
had been jostling with the MP before pulling out a gun. The gun
was “homemade,” according to multiple reports.

Given the  low level of firearms awareness in the U.K., I have doubts about the witnesses ability to discern whether the gun was homemade or not.  On the other hand, homemade guns are fairly common in the U.K. because factory made guns are so tightly controlled.  A third possibility is that the gun was modified from a factory long gun or a replica or blank firing gun.

That a British MP was murdered by a mentally ill man who had a gun and a knife in his bag illustrates the failure of gun control in England and Wales.

The only previous MP who was shot was in 1812, when the Prime Minister, spencer Percival was assassinated in 1812. From independent.co.uk:

Serious attacks are rare, although that doesn’t make them much less frightening. They have been an infrequent, out-of-the-blue shock since the shooting of Spencer Perceval, the only Prime Minister to have been assassinated, in 1812.

That was with a .50 caliber  muzzleloading single shot pistol, which is not even being considered by gun control advocates. There were no percussion caps invented at the time, so it was likely a flintlock.  Not a single MP was shot during the entire history of modern firearms before “gun control” was instituted in England and the Wales.

Update: A single witness alleged that the attacker yelled “Britain First”. There were several people nearby when the attack occurred.  Area residents say the attacker never showed any interest in politics.  It seems more likely that the witness’ prejudice are in action here, instead of the attacker’s.

The campaigns to keep the UK in the EU or to leave it have been suspended, but the referendum will take place as scheduled.

all the pro-gun morons, It is proven and shown over and over again that you people only believe what you want to believe. Facts and numbers dont lie, less guns = less gun deaths. Case in point here https://en.m.wikipedia.org/wiki/Firearms_policy_in_the_United_Kingdom But I dont expect you stuborn assholes to believe it, I expect you dummies to pull reasons out your ass to not believe it. You guys are are loyal slaves controlled by the gun industry to help them sell more guns. If Jesus Christ Apearred and told you not to use any more guns, you guys would not do it, not… Read more »

The difference in total murders between the US and the UK is 30 thousandths of a percent, a number too small to trigger your hysteria. Your point that “less guns = less gun deaths” seems specious. Perhaps you didn’t know that if the UK banned cordage, deaths by hanging would decline. Apparently, LaPierre has gotten under your skin. Clearly, he’s better at numbers and facts than you are. Your criticism of him seems addled. Perhaps he’s a cause of your derangement.

England has strict laws on owning manufactured firearms, how will they control the home made weapons, by making a new law to outlaw home made firearms, which is probably already in place,, evil people do evil deeds

What I like from all the news outlets covering this, and they don’t even see it, is that they are actually saying that someone who really wants a gun will get one, and that gun control doesn’t work.

The Brits would tell you that the reason this doesn’t happen more often, and the reason there isn’t more violence there is because of their successful imposition of gun controls. Of course they never want to discuss laws that cause the innocent to be unable to defend themselves, without going to jail themselves. Never will they discuss the number of injuries and deaths caused by these same laws. Early 80s, late 70s ATF took possession of a prison work shop made copy of the S&W model 76 9mm submachinegun. Tested at their labs, functioned without jamming at 1200rpm. Really, what… Read more »

I guess I need to change my reading habits. The article I read made no mention of a gun. And I read it specifically to see if a gun was involved. Anyone have a photo?

The whole “Britain first” yelling has been debunked and no witness heard him say it. The stay in the European Union side was just using it to exploit the tragedy because the brexit numbers are higher then them. They printed it the papers and tweeted it even befor the poor woman was dead. Shameful exploitation for political gain just like the Orlando shooting.
Since debunking the stay people have finally started to pull all their tweets

They’ve been ‘pulling their tweets’ all along!

“It’s not sort of like the kind of gun you see normally.” That statement would lead the casual observer to believe England is awash with guns despite having ‘draconian’ gun laws in place. What does it take to make people understand laws don’t stop criminals?