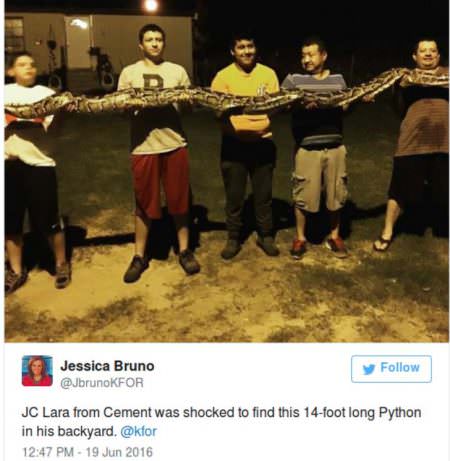 A snake this large is a clear and present danger to pets and small children.  While most snakes can be dispatched with a shovel or hoe, I would not want to attempt that with this python.  It might take offense.

A firearm is a stand off weapon that allows you to apply deadly force at a distance.  A picture with the article shows the python was shot in the head, killing it quickly and humanely.

The snake was a surprise for the teen who discovered it. From kfor.com:

“I come outside, and the snake is literally slithering in our yard, and I’m like ‘Oh, no, this is a dream.’ So, I shut the door and open it back up, and it’s for sure not a dream. So, I go tell my dad,” Lara said.

It wasn’t just any snake either but a 14-foot-long python.

“My dad was like ‘Hey, just go get the shovel’ and I was like ‘No, we need the gun. Like, this is a huge snake.’ I didn’t know how long it was at the time, but I knew it was big enough to eat someone, you know,” Lara said.

Lara and his dad shot and buried the snake, something Lara said they felt they had to do with several small kids living in the area.

“This is why we built the fence, for creatures not to get in and for them to actually play safe, and seeing that here is just scary,” Lara said. 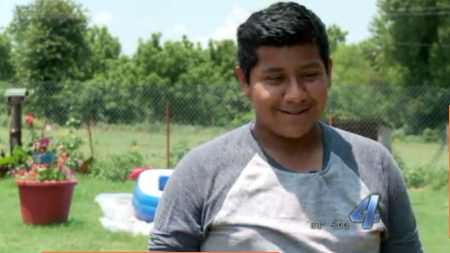 Notice that the JC and his father did not want to shoot the snake. They were concerned that it belonged to someone else. They knew it would be irresponsible to allow it to escape and become another person’s problem. So they made the hard choice and took the responsible action.

To many, “back yard” means suburbia. You can see that the Lara’s back yard is out in the country. The snake was likely released in June of 2016. Pythons do not survive Oklahoma winters in the wild. They are tropical animals. Unlike Florida, Oklahoma does not have to worry about cultivating a wild population of exotic pythons.

People in the country often have to deal with pets that irresponsible owners abandon.

Firearms allow for relatively safe defensive actions, whether it be defense of the family vegetable garden from rabbits, pets from a rabid skunk, or children from a dangerous snake.

I do not always carry a shovel or hoe, but I usually carry a pistol. Regrettably, I have had to kill poisonous snakes at my ranch. It is not that I hate snakes; it would be irresponsible to allow living land mines to take up residence next to the buildings when I bring children and dogs there.

I attempted to relocate one sidewinder that had created a den next to the front door. I released it a few hundred yards out in the desert. The next morning, it was coiled up on the front step. I re-captured it and took it to Yuma Proving Ground so the preventive medicine department would have an example.

Most defensive uses of firearms against animals never make the news. It is not news for a gardener to shoot crows that are pulling up his seed corn, a retired couple to shoot a skunk that is acting diseased, or a sportsman to shoot porcupines that are chewing holes in his cabin.

Shooting a 14 foot python in the back yard in Oklahoma. That is news.