As exclusively reported by AmmoLand News in May, the former owner of National Survival Store in Las Vegas alleges multiple improprieties resulting from Bureau of Alcohol, Tobacco, Firearms and Explosives oversight.

Edward Mark Felix was forced to give up control of his shop to his then-fiancée after an assault conviction for what he maintains was the outcome of his foiling an in-store robbery.

Bank record show Wells Fargo complied with ATF instructions to withhold account records from Felix. Further analysis of checks suggest the agent being addressed may have signed at least one of the checks. Authority for any of this is unknown, quite probably because it does not exist.

This report follows up on events beginning with the Federal Firearms License for the business, signed for in 2007 by Felix, which expired after three years in November, 2010: 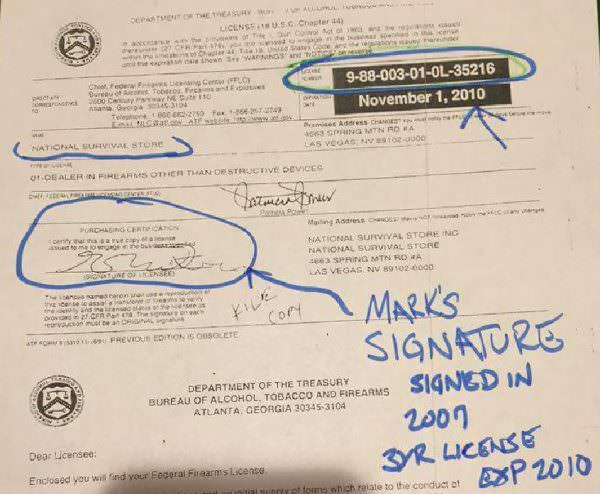 Things get curious with a request by the new proprietor to withdraw an application for an FFL, presumably in possession of ATF, and requesting a fee refund in August, 2010. 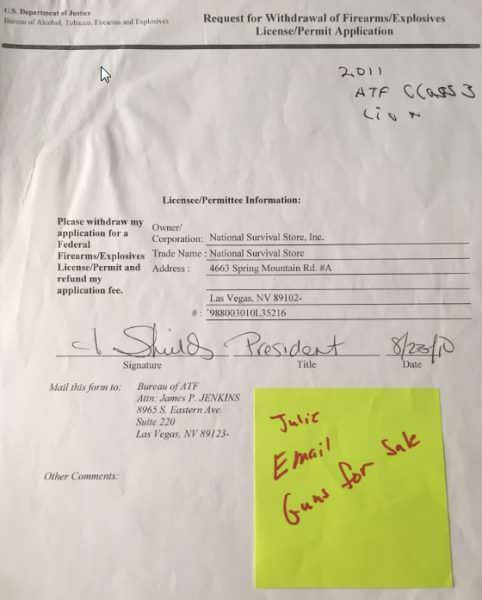 A subsequent FFL issued by ATF has a November 1, 2013 expiration. Note the same last five digits on both licenses. Per Felix, no one was authorized to sign on behalf of the store, and ownership of the corporation it was formed under was never transferred to another person or entity.

“He never gave up rights to the store,” Felix’s nephew Wesley corroborates. “My uncle gave it to my brother. He’s been 50% share holder since 1996. No one could never take over anything without his written, legally-documented approval.”

“Only the owner of the license (Edward Mark Felix) has the power to change the name of the Licensee/Resp Person” on the license, a knowledgeable legal source tells AmmoLand News.  As licenses are not transferable per U.S.Code, ATF treated this as a change of control. Further, how the business would have been carried on in compliance with succession requirements is not known, particularly with Felix denying transferring control.

“There is a gap a mile wide,” the legal source said about how documentation discovered to date fails to account for how the name on the FFL was changed. Yet the store continued to operate and continued to receive gun shipments under the “new” FFL, all under close ATF oversight.

A likely explanation is that ATF was directing things for reasons which include multiple allegations to be explored in forthcoming reports.

As per the last report, this report will also be forwarded to both House Oversight and Senate Judiciary committees. Because there are still many additional elements to this complex and convoluted story that have yet to be explored, Felix welcomes further media inquiries to validate his claims about what went on under ATF’s watch.

The government under pussy boy Obama can’t enforce the laws that are on the books, but it’s the gun’s fault not there’s. BS, it’s time to take this country back and hold everyone responsible. The VA, IRS, ATF and the initials go on and on can’t do their job, but they don’t get fired they get promoted. God help us, because the government sure can’t!

It doesn’t matter. They do what they want, and you do what THEY want! Get it? In 2007, I inquired of the National Licensing center where my License was as the sixty day statutory window to issue the license had expired and I had not heard anything on it. The nice lady on the phone told me, “Sir, it is sixty to ninety days.” I naively reminded her the law states the license is to be issued within sixty days. That is the law. I was told, in no uncertain terms, “Sir, it is sixty to NINETY days!” In 2010… Read more »