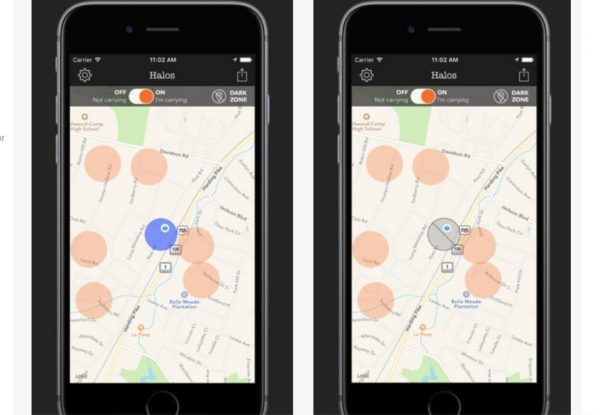 Arizona – -(Ammoland.com)- Would you like to know if other legal gun carriers frequent the same areas that you do?

An iphone app is available.  Android users can be put on a wait list. From halosforce.com:

Halos is a revolutionary app for the exclusive use of individuals in the United States who have their state-issued concealed carry handgun license or otherwise fulfill the concealed carry eligibility requirements in their state of residence and are 21 years or older.

Halos anonymously allows members to see the approximate location of other members on a map. A member’s specific location is obscured (without revealing either identity or exact location). Members are not able to communicate with other members.

The premise of the app has merit.  The idea is that people can make known that a non specified gun carrier is in the general area.  The specific location is deliberately obscured.  The app allows gun carriers to obtain some of the advantages of open carry while retaining some of the advantages of concealed carry.  People who look at the app will have an idea of gun carriers in the area, and their approximate locations.  The app will only apply to those who sign up.

If a fair number of people sign up, it will give some indication of where legal gun carriers tend to be.  It is not any sort of registration or tracking device that is useful to the government.  Why not?

If you have a concealed carry permit and a cell phone (remember you have to have a cell phone for this app to work), the government can already track you.

They can track you far more accurately than this app does. They can do it all the time your phone is turned on, whether the app is on the phone or not.

All cell phone companies track your location whenever your phone is turned on.  Several circuit courts have ruled that obtaining the information from cell phone companies does not require a warrant.  To think the NSA cannot receive it in near real time requires some sophisticated naivete.

If you worry about being tracked because of some app that you signed up for, you overlook the obvious.  If the government wants to track concealed carry permit holders, it is already doing so.  If it isn’t tracking them, it is because no one has decided to do it.  It does not need an app.

The government already has access to  everything it needs for the tracking. The difference is, if you have the app, and the government wanted to have the records of the app, they would be legally required to obtain a warrant.  No warrant is required for what they already have.

If you live in a “Constitutional” carry state, and do *not* have a concealed carry permit, then the government could possibly get a warrant for the names and telephone numbers of the people who have the app, and track you when they would not have before.

They could as easily obtain the names of people who purchased ammunition or guns, who rented time at a range, who visited gun friendly sites on the Internet.

They would not need a warrant, if a credit cared was used.  The information on commercial transactions is sold and traded all the time.  Google collects lots of information on commercial transactions, and ties it to you.  To think the government cannot access those records is very trusting.  If the government wants to track a certain phone number, they can do so.

Aside from government tracking, there are real concerns.   Private parties who sign up for the app might be able to figure a way to track you with it, or find you, in certain circumstances.  I do not worry about private parties as much as I worry about corruption in the government.

The app has limited usefulness.  It might be amusing.  It could provide a bit of education.  I might even sign up for it. The app is fairly cheap.  The amusement factor might be worth the price.  If you sign up quickly, it could be free.

Membership is free for the first 100 people in each state, after that members will pay $1.99/year. In the near future, Halos will offer a view-only version to the general public for an annual fee as well.

If I sign up, I will not be worrying about the government doing what they can already do without the app.

We have lost any privacy protections we had in terms of the government and phone meta data.  If you do not want to be tracked, put your phone in a portable Faraday cage. You cannot remove the battery on most iphones.  A metal ammo box would probably do the job, if it doesn’t have holes in it.

Other than that, when your phone is on, assume you are being tracked.  The data is already out there.
©2016 by Dean Weingarten: Permission to share is granted when this notice is included.

If you sign up quick it might be free ? You couldn’t pay me to have that ridiculous app.

I still carry a flip phone with the locator set to “911 Only”, meaning gubmint spooks only know my location to the nearest cell tower, and get nothing if my phone is off.

That’s a great avantage of having a non-smart phone too. If it works good for you, and it appears to,more power to you.

Weingarten has gone senile. He might be a stock holder in this crap.

Don walk but run away from bull*sh*t like this app. Weingarten is actually plugging this crap with approval ? Just another danger for lawabiding firearms owners to avoid.

A more useful app would be one that shows Democrats in the area with guns.

Absolutely pointless. Why would I need to know where other’s are carrying? To feel safe? I have my firearm to make me feel that way.