Austin, TX -(AmmoLand.com)- Since the earliest days of the nearly decade-long debate over allowing concealed carry on Texas college campuses, opponents of the idea have clung to the mistaken belief that the debate is about whether a campus with guns is more or less safe than a campus without guns.

They apparently find it easier to wrap their heads around the simple dichotomy of ‘guns versus no guns’ than to grasp the nuance of a debate about whether criminals should be the only ones carrying guns on campus or whether vetted, licensed adults should be allowed the same measure of personal protection on campus that they’re already allowed virtually everywhere else.

Recently, this simplistic ‘guns versus no guns’ view has manifested itself in opponents’ assertion that the confusion caused by protesters who were openly carrying rifles when a sniper attacked a Black Lives Matter protest in Dallas proves the dangers of campus carry. In a July 25 column in The Tribune of Humble, Tex., Dave McNeely writes:

Some of the people marching in the Black Lives Matter rally in Dallas July 8 — when five cops were killed and seven others were injured, plus two civilians — were carrying assault rifles.

Suspecting that the gun-toters might be involved in the ambush on the cops, a picture of one of them was put up by the police on social media, to help track him down. It gained national attention.

Fortunately, he and the other gun-toting marchers weren’t taken out by law enforcement.

So, now, allowing more guns on campus. Will it help prevent violence, or help subdue it if it occurs?

In an interview published July 22 on the blog CultureMap Austin, bestselling author Elizabeth Crook, whose 2014 novel Monday, Monday depicts a fictionalized account of the August 1, 1966, sniper attack at the University of Texas at Austin, states, “As for campus carry, I absolutely do not think it will deter random acts of violence, I think it’s pretty certain to create them. We saw during the recent horrendous shooting of police in Dallas how armed civilians endangered themselves, confused police, and were of course utterly ineffective in stopping the sniper.”

To these people it makes no difference that the armed citizens who caused confusion for Dallas police were carrying rifles, not handguns; that the guns were carried openly, not concealed; that the guns—at least some of which were purportedly unloaded—were carried as a form of protest, not as a measure of self-defense; that proponents of campus carry have never claimed that the licensed, concealed carry of handguns offers defense against a sniper firing from a concealed position; that concealed carry is about personal protection, not public protection; or that Texas license to carry (LTC) holders are taught to move away from the sound of gunfire and stay out of the way of police.

Antonia Okafor, Southwest regional director for Students for Concealed Carry, commented, “Only after opponents realize that the campus carry debate isn’t as simple as ‘guns versus no guns’ will we, as a society, be able to have an intellectual, fact-based conversation about this deeply nuanced issue.”

About Students for Concealed Carry:

Students for Concealed Carry (SCC) is a national, non-partisan, grassroots organization comprising college students, faculty, staff, and concerned citizens who believe that holders of state-issued concealed handgun licenses should be allowed the same measure of personal protection on college campuses that current laws afford them virtually everywhere else. SCC is not affiliated with the NRA or any other organization. For more information on the debate over campus carry in Texas, visit WhyCampusCarry.com.

It is interesting to note that the UT Tower massacre event occurred at a time when it was perfectly legal and acceptable for college students to have personal firearms in their dorm, home, or vehicle, and many students did so. I was not present at UT for that event, but was in undergraduate college at the same time, and I kept no less than 2 rifles, 1 shotgun, and 1 pistol in my own dorm room at UNM. No one thought this was even unusual, let alone dangerous. In any case, during the event at UT, no one else was… Read more »

@Oldshooter, Thank you for your insight.

FIRST: You REALLLY need to spend more time on Stanford’s (yes the liberal bastion of learning) available research papers as well as ALL of the available LEA reports. It has been PROVEN that the areas in the US with the LOWEST crime rates have the most gun carrying populous and the most gun supporting laws.

SECOND: NONE of your examples were CCW holders! Where in the WORLD did you come up with this tripe?

Qman — I agree. Let’s defer to Stanford. Stanford News November 14, 2014 “Right-to-carry gun laws linked to increase in violent crime, Stanford research shows… Stanford research reaffirms that right-to-carry gun laws are connected with an increase in violent crime. This debunks – with the latest empirical evidence – earlier claims that more guns actually lead to less crime.” “The strongest evidence was for aggravated assault, with data suggesting that right-to-carry (RTC) laws increase this crime by an estimated 8 percent – and this may actually be understated, according to the researchers.” http://news.stanford.edu/2014/11/14/donohue-guns-study-111414/ http://papers.ssrn.com/sol3/papers.cfm?abstract_id=2443681 p.s. See my response to Ammoland… Read more »

“…the same measure of personal protection…” There’s the problem. Research has simply not demonstrated a net protective benefit to having a gun in the home or to carrying a gun for personal protection. The data unambiguously shows the opposite. Guns are positively associated with increased risk of death and injury, and are rarely used for self-defense. University folk know these facts. They did the research. The record of citizen licensed concealed carriers bears this out. On campuses and school grounds their record is 11 negligent discharges, 8 criminal homicides, 1 suicide, and 0 (zero) defensive gun uses. Here are the… Read more »

Nice try Travis, but we have to call bogus research on your run down as this fairy tale list by the hack site http://concealedcarrykillers.org/ where it has been proven that of all the shooters listed, none of them had CCW licenses. If you believe this data you have been deceived. 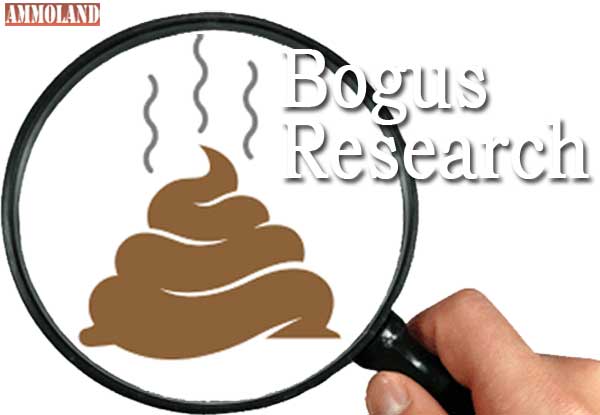 Ammoland — Thanks for having the guts to allow contrary opinions on your forum. Here are citations referencing licensure for each example above. As to VPC’s lists, they do occasionally have a “false positive”. I found 2 in their 30 or so examples of “mass” shooters licensees. 1) Arizona Gunman Had Threatened School “Flores reportedly had a concealed weapons permit” Violence Assessment and Intervention: The Practitioner’s Handbook, Second Edition https://books.google.com/books?id=XsgBW6deObQC&pg=PA239&lpg=PA239&dq=“Flores+reportedly+had+a+concealed+weapons+permit”&source=bl&ots=PPQt4JdHZq&sig=LUaUjvVLfUvHCDk56BB-AG6FCDA&hl=en&sa=X&ved=0ahUKEwjc8aersJvOAhUN12MKHTrwAVUQ6AEIHjAA#v=onepage&q=“Flores%20reportedly%20had%20a%20concealed%20weapons%20permit”&f=false “Fellow student Lori Schenkel said Flores bragged to pediatrics classmates last year that he had received a concealed weapons permit.” http://www.cbsnews.com/news/arizona-gunman-had-threatened-school/ 2) Alamo Colleges Want Say in Guns on Campus… Read more »

I believe you are mistaken. The empirical data shows that liberal conceal carry laws do in fact relate to reduced crime rates. Nothing deters criminals more than an armed potential victim.

Whatever your selling, I’m not buying.

As I mentioned to Qman below, “Right-to-carry gun laws linked to increase in violent crime, Stanford research shows… Stanford research reaffirms that right-to-carry gun laws are connected with an increase in violent crime. This debunks – with the latest empirical evidence – earlier claims that more guns actually lead to less crime.”

“The strongest evidence was for aggravated assault, with data suggesting that right-to-carry (RTC) laws increase this crime by an estimated 8 percent – and this may actually be understated, according to the researchers.”

It’s even simpler that “guns versus no guns”.

SHALL NOT BE INFRINGED.

Americans should be allowed to protect themselves in public, regardless of where they are. PERIOD.