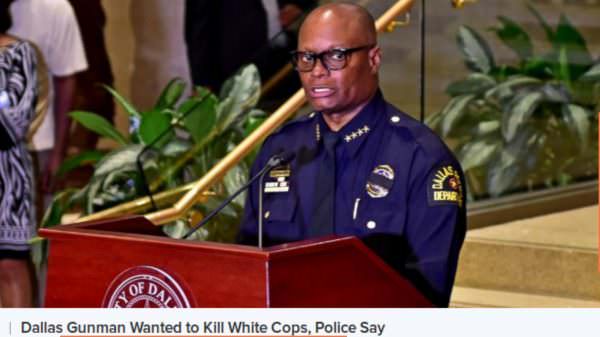 Arizona – -(Ammoland.com)- Let us call this ambush in Dallas what it is.  A domestic racist terror attack aimed at white people and white police. From abcnews.com:

One of the suspects in the ambush-style shootings in Dallas that left five police officers dead overnight told a hostage negotiator he was upset about the recent police shootings of two black men and he wanted to kill white people, especially cops, Dallas Police Chief David Brown said at a news conference this morning.

Seven hours after the first shots, the last suspect was shot and killed.

The Obama administration has been quick to blame racism for incidents that later turned out to be completely justified and unrelated to racism.  When proven wrong, they have never retracted their statements or backed off of them.

When has the Obama administration apologized to Daryl Wilson, the white police officer who was totally vindicated in the Ferguson shooting of Michael Brown?

This administration has allied itself with Black Lives Matter, a radical anti-police, anti-white, racist group that has been repeatedly associated with calls for violence against the police.  Representatives of Black Lives Matter have been invited to the White House numerous times. To Black Lives Matter, white lives do not matter.  It is a virulently racist organization.

The Obama administration is famous for its “apology tour” around the world, blaming the United States and previous white presidents for the ills of the world.  That show of weakness has resulted in the strengthening of our enemies all over the globe.

A similar situation has been created in the black racist community with the way Black Lives Matter has been coddled and approved of by this administration, no matter how racist they have been, no matter how vociferously they have chanted for the deaths of police.

At every opportunity, the Obama administration has blamed the United States and white people for perceived injustices.

President Obama piously intones that he is disgusted by the ambush that took five innocent police lives and wounded several others.  He need only look in the mirror to find someone to blame.

Sure it was!
Hillery needs every single Black American to get out and vote for her, if she is to have any chance of
winning. Yesterday she was on TV. preaching about how White People need to change! Fortunate turn of events for her, don’t you think? This golden opportunity for her to rally her flagging Black Constituency.

We need to return to Biblical Standards and just call this murder. Words like “terrorist:”,” racist” give a pseudo-respectability to such evil.
Just as the Left is always hunting “anti-black racism”, the Right has started to bemoan “Anti-white racism” We now have white victimhood to stand beside black victimhood.

When are the whites going to do something about blacks calling open season on our heads? Open your eyes people, that is what this has become in this seriously messed up country. When you have idiots in the white house like barry hussein sleeper-cell muslim terrorist NoBoma, well, it is not good at all!! Personally, I am sick and tired of blacks killing and beating whites and nothing happening and the media is completely tight lipped about all of it! Look into the amazing works of Colin Flaherty and “Don’t make the black children angry” – great piece of work!!

What we need to do, WUA, is vote as a block as the minorities do. Then get more and tougher controls over our government, so that we the people are back in charge.

The major issue is police are being taught , hearing the word gun you shoot , if his hands move shoot , if he he resists when you body slam him shoot. We can say he resisted. and it was a justified shoot.
Maybe if it it were their kid stop, think , react .

Really? Please refer me to their training program that specifies this. I have friends in the community and they are being taught quite the opposite, black and white alike. So please state your opinion as such and not as fact. This is only a racial issue because the media and the powers that be are slanting it that way, the “problem” in general not Dallas specifically. There’s enough divisiveness in our country without having to put LEO’s on the other side of the fence. Doing so based on a few bad apples is using the same brush that anti’s paint… Read more »

When they are found to have committed no crime after the fact, ALTHOUGH AN INNOCENT MAN IS NOW DEAD, the system and it’s representatives, put THEMSELVES on the other side of the fence.

If you did this you would be in jail. The system’s representatives for some reason, get the OOps defense, every time.

You didn’t specify which shooting you are referring to. If it is the one in Minn. The possibility exists he had a gun on his person.
Anyway, put yourself in the officer’s shoes. They are trained to observe bad situations and act accordingly. Most of them want to go home when their shift is over, not to the morgh. Just think if these people acted responsible and did responsible things they wouldn’t be putting theirselves in the position of the wrong place, at the wrong time, doing the wrong thing.

Iv been shot, ran over, beaten nearly to death multiple times by my protecting servants. . I now pay protection royalties to the local 18th streeters to keep me safe.

Then why don’t YOU join your local police force, Eric, and show us all how it SHOULD be done. Put up or shut up. By the way, a kid can kill you just as easily as an adult.

Obama or clinton will never call it anything to do with White….. now if it were the other way around…….

DOJ be already be saying Hate crime by racist white………..