(AmmoLand.com) Michigan City, IN — Realtree is partnering with Browning and Winchester Firearms, as well as Baron Technology, Inc. and GunBroker.com, to commemorate their 30th anniversary, while at the same time helping families when they need it the most.

Realtree commissioned Baron Technology, Inc. to hand engrave commemorative Browning and Winchester shotguns and is donating two of the works of art to the Kids & Clays Foundation, which raises funds through shooting events for Ronald McDonald House Charities. Ronald McDonald Houses provide a “home away from home” for critically ill children and their families. Both firearms will be sold through GunBroker.com.

“Realtree is very proud to be able to utilize our anniversary celebration to help families when they need it the most,” said Realtree Designer and President Bill Jordan. “Since the beginning of Realtree, we have known that it is our duty to give back to communities who have helped us become what we are today. I can’t think of a better organization and mission to support.” 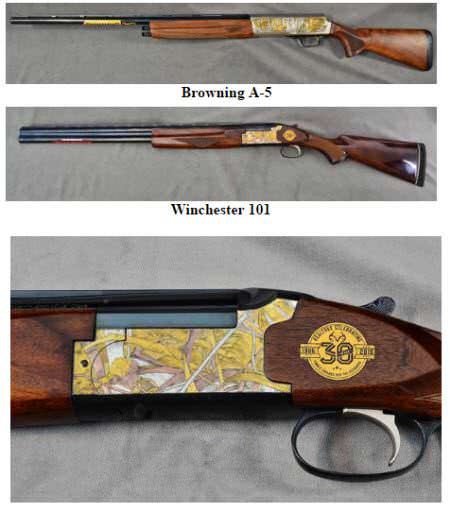 The two firearms are a Browning A-5 and a Winchester 101, with both having been beautifully hand engraved by Baron Technology, Inc. in Realtree camouflage, utilizing gold and silver. They both also bear a gold medallion in the stock with the Realtree 30th anniversary logo.

The Winchester 101 will be the first firearm up for GunBroker auction starting on August 1 through August 14. The Browning A-5 will be available starting August 14, and ending August 28. All proceeds benefit the Kids & Clays Foundation and Ronald McDonald House Charities.

“We can’t thank Realtree, Browning, Winchester, Baron and GunBroker enough for working together on such beautiful firearms for our cause,” said Doug Jeanneret, executive director of the Kids & Clays Foundation. “This is certainly a great opportunity to own one-of-a-kind shotguns that are nothing short of works of art, while at the same time making a difference in many peoples’ lives.”

The funds raised from the two GunBroker auctions have the potential to help hundreds if not thousands of critically ill children and their families in their time of greatest need.

“We owe all of these companies a debt of gratitude and they are to be commended,” added Jeanneret.

For more information on Realtree’s 30th Anniversary or on the companies and organizations working together on this program, visit: