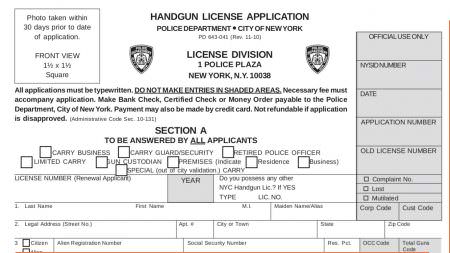 Arizona – -(Ammoland.com)-
The New York City scandal of bribes being paid to obtain highly desired and irrationally restricted gun permits is something that few find unusual, exceptional or unlikely.  The entire practice of the unconstitutional gun permit scheme was conceived in corruption and has always been administered as a way of benefiting elites and corrupt officials.  People without connections or money lose their Constitutional rights.  From ap.org:

The New York investigation caught Alex “Shaya” Lichtenstein, a volunteer safety patrol member in his Orthodox Jewish neighborhood, on tape bragging that he had obtained at least 150 licenses for people to carry guns by paying up to $6,000 in bribes for each weapon.

The bribes were covered by fees of $10,000 or more paid by clients who in turn saw their applications to carry a handgun approved in two months or less – compared to as long as a year in normal circumstances – while other clients saw their criminal histories ignored.

AP has long approved of keeping the common folk disarmed, so it is no surprise that they find the scandal that some people were able to obtain gun permits by paying $10,000 dollars to a “fixer”.  The real scandal is that no one should have to pay thousands of dollars to exercise a fundamental constitutional right.

The New York gun scandal has its foundation in the Sullivan Act, a product of the corrupt gangster “Big Tim Sullivan”.  “Big Tim” introduced the act to prevent his enforcers from being shot by the people they were extorting money from.

Permits have always been available to the well heeled and well connected.  It is no surprise that Donald Trump and two of his children have coveted New York City pistol permits.  The surprise is that the Trumps desire that the right to have them be extended to all, as the Constitution requires. From the New York Post:

Sullivan knew the gangs would flout the law, but appearances were more important than results. Young toughs took to sewing the pockets of their coats shut, so that cops couldn’t plant firearms on them, and many gangsters stashed their weapons inside their girlfriends’ “bird cages” — wire-mesh fashion contraptions around which women would wind their hair.

Ordinary citizens, on the other hand, were disarmed, which solved another problem: Gangsters had been bitterly complaining to Tammany that their victims sometimes shot back at them.

So gang violence didn’t drop under the Sullivan Act — and really took off after the passage of Prohibition in 1920. Spectacular gangland rubouts — like the 1932 machine-gunning of “Mad Dog” Coll in a drugstore phone booth on 23rd Street — became the norm.

New York politicos have their heavily armed guards.  They have no trouble obtaining permits if they desire them.  But they want to be sure that the people who pay their salaries and who are victims of their corruption, are not armed.

I do not expect New York City to correct the inherent corruption in the Sullivan Act.  I do not expect NYC to reform how police bureaucrats use petty administrative  obstacles to prevent nearly everyone in the city from exercising one of the Constitution’s most fundamental rights.

New York has specialized in importing new immigrants and teaching them that corruption in the city is a way of life that cannot be fought.  It is not hard to do.  Most of them come from places with even more corruption and less freedom than New York City.  The percentage of foreign born residents in New York City at the 2010 census was 37%.  New York City residents quickly learn that the Second Amendment does not apply in New York City.

John  Stossel Tries to Get a Gun Permit Video

In most of the United States, carrying a concealed weapon requires no permit or a permit that is easily obtained. It may take a by day’s training and a fee that costs less than a day’s minimum wage.  Those places suffer no more or less crime than New York.  People who take the trouble to obtain a permit are exceptionally peaceful and responsible.  Those with violent histories are already prohibited from possessing firearms by national law, with local variations across the nation.

It is unlikely that New York City residents will be able to exercise their Second Amendment rights anytime soon.  The history of corruption is too strong.  But it will happen eventually.  The rest of the country, accustomed to more freedom, will not put up with being treated as a lesser citizen when they visit NYC.

Some fans of big government have contended that corruption is necessary for big cities to “work”.  It is a nonsensical argument.  There are a number of cities around the world that are known for fair business practices and a lack of corruption.  Consider London, Geneva, Singapore, Copenhagen.  All are run effectively without significant corruption.  Big cities are known for corruption.  They do not have to be corrupt.

Digital recordings make police and official corruption harder to conceal.  Technology and time are on the side of the Second Amendment.

NYC voted this liberal into office and now they are seeing what comes of there stupidity. America are you really that stupid? Guess we’ll see in November.

Good commentary on the laws of a city and state that I know firsthand as a life long resident of New York, I was also a Police officer 20 yrs in the city and its true here more than most states of our union. The only people allowed there second amendment rights are the same one percent that want to take my right to carry away.The appointed Police Commisoner was not willing to give retired NYPD hero’s there second amendment rights to carry without a payment of close to 300 dollars to obtain there carry license only after tremendous outrage… Read more »

Tim Sullivan was a leader of the Irish Five Points Gang [the movie Gangs of New York] will show how violent NYC crime is. But it wasn’t just the safety of his thugs he was concerned about. The pattern of NYC gun control is solidly MAY ISSUE or MAY DENY because Sullivan wanted his gang and associates to not be arrested by the police. He could issue a permit to his associates and deny a permit to rival gangs and intended crime victims. The Sullivan was intended to promote crime. It was the first and thus has been the pattern… Read more »

I don’t normally post anywhere but as a reader of “Free Republic” I find that there are constantly complaints about unfair enforcement of mostly all laws particularly gun laws. The US Constitution is the only permit that any law abiding citizen needs to carry arms “anywhere” in the USA PLAIN and SIMPLE. No infringements allowed, PERIOD. We the people are never going to be able to overcome this gov’t. bullshit until we unite in collective RESISTANCE. Complaints are not going to accomplish anything, it just bounces off of the ears of the powers that be. The “Redcoats” were not defeated… Read more »

Gee, Jim – you seem to have missed the part of the 2A that includes the words “except” and “unless.” Politicians and judges don’t seem to have that problem. Good description: “…Gov’t BS” – you did say that didn’t you! One of my favorite and often used adjectives when dealing with the government rules, regulations and legislation.

I agree with you Jim! Things are so beyond out of control in this country. If you rich, everything is grand, but if you are an average poor piece of tax revenue generating nobody, well, its not so great. This disgusts me and it is shameful what this once great nation has become. Corporate America has Gov’t in their from and back pockets…
Wake_Up_My-Fellow_Americans.

You are right. I am hoping that we can get the right people up there to turn things around, so we don’t have to revolt. but I doubt it will happen. I am alright with pledging my life for my freedom.